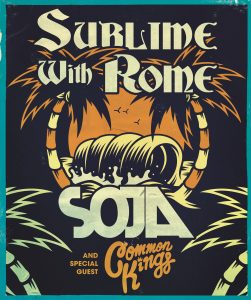 Tickets are $48.50, $38.50 and $28.50 and go on sale Friday, February 8th at 10:00am through Ticketmaster. Ticketmaster customers may log on to Ticketmaster.com or call Ticketmaster’s national toll free Charge By Phone number 1.800.745.3000.  Tickets will also be available at the Mohegan Sun Box Office beginning on Saturday, February 9th, subject to availability.

Sublime With Rome will be touring in support of their forthcoming full-length album, Blessings, the band’s third album coming out this summer.   The band’s last album, Sirens (2015), peaked at #2 on Billboard’s Current Alternative Album chart and #3 on Billboard’s Rock Album chart. The release included Sublime With Rome’s Alternative radio single “Wherever You Go,” which peaked at #16. Sirens is preceded by their 2011 debut full-length Yours Truly with two Alternative radio hits “Take It or Leave It” and “Panic,” which peaked at #4. Collectively, Sublime With Rome clocked more than 80 million U.S. streams to date.