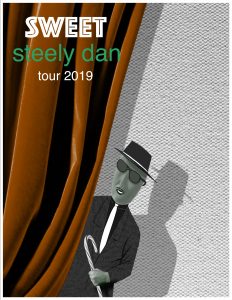 Tickets are $66.00, $46.00 and $36.00 and go on sale Friday, April 19th at 10:00am through Ticketmaster. Ticketmaster customers may log on to Ticketmaster.com. Tickets will also be available at the Mohegan Sun Box Office beginning on Saturday, April 20th at 10:00am, subject to availability.

Founded in 1972, Steely Dan began recording their first album, Can’t Buy A Thrill, released that November, yielded three hit singles, “Do It Again,” and “Reelin’ In The Years,” and “Dirty Work.” The band toured behind Can’t Buy A Thrill and the following two albums, Countdown to Ecstasy and Pretzel Logic, both in the United States and Britain.  Over the next five years, four more albums were released: Katy Lied (1975), The Royal Scam (1976), Aja (1977) and Gaucho (1980).

Now one of the top international touring bands, Steely Dan’s first new album in 20 years was highly anticipated. 2001 saw Two Against Nature win four Grammys including the award for “Album of the Year.” In March, Steely Dan was inducted into the Rock and Roll Hall of Fame. Finally, in May, Donald and Walter received honorary doctorates from the Berklee College of music.

Now concentrating on live appearances, the band began to offer evenings that featured performances of entire albums. Countdown to Ecstasy, The Royal Scam, Aja and Gaucho have all been performed live, often at the band’s annual appearances.

Recent partners on major tours have included The Eagles, The Doobie Brothers, Steve Winwood and Elvis Costello and the Imposters.