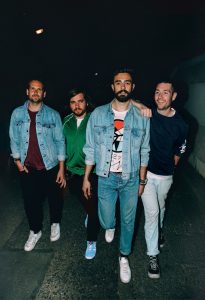 UNCASVILLE, CT (May 3, 2019) – Grammy-nominated British phenomenon Bastille has announced their fall North American Tour, Doom Days Tour Part 1. The run will kick off September 16th at The Met in Philadelphia and stop by Mohegan Sun Arena on Friday, September 27th at 7:30pm with special guest Joywave.

Tickets are $44.50, $34.50 & $24.50 and go on sale Friday, May 10th at 10:00am through Ticketmaster. Ticketmaster customers may log on to ticketmaster.com. Tickets will also be available at the Mohegan Sun Box Office beginning on Saturday, May 11th at 10:00am, subject to availability.

This tour highlights Bastille’s new album, Doom Days, set for release by Virgin Records on June 14th. Every online ticket order purchased for the U.S. dates on the fall tour will include a CD of the new album. The pre-sale code will be revealed on the band’s Instagram stories the morning of the pre-sale launch. The artist ticket pre-sale begins on Friday, May 3rd at 10:00am, local time. Tickets go on sale to the public on Friday, May 10th starting at 10:00am, local time.

Fans who pre-order Doom Days in digital format will instantly receive “Joy” plus the #1 Alternative hit “Quarter Past Midnight” and the title track, which premiered last week on Annie Mac’s BBC Radio 1 show.

Doom Days marks something of a shift in perception from its widely acclaimed predecessor, Wild World, which confronted the world and the actions of those in power. Recorded during the course of 2018 at the band’s South London studio, One Eyed Jack’s, the new album captures the need to temporarily switch off and escape.

Doom Days bustles with energy and ideas. Its diverse sound takes in Gospel, House Music and R&B to name a few genres, and incorporates instrumentation inspired by Bastille’s acclaimed Re-Orchestrated tour. The album is at times introspective, intimate, political and also perhaps their most danceable yet, with tracks like “Million Pieces” and “Nocturnal Creatures” built on 90s breakbeats and U.K. garage hooks. Pop culture references, mood-setting dialogue clips and a rolling cast of backing vocalists add textures and voices to this night out.

Hailed by Rolling Stone as “Britpop’s new crown princes,” Bastille has sold over eight million adjusted albums and amassed more than 6.5 billion cumulative streams globally. The band was introduced internationally with the single “Pompeii,” which is now 6X Platinum in the U.S. alone. “Pompeii” and subsequent hits “Good Grief” (2016) and “Quarter Past Midnight” (2018) each topped the Mediabase Alternative chart in the States. Marshmello and Bastille’s hit single, “Happier,” has topped charts around the world, with cumulative streams exceeding two billion. Certified 2X Platinum in the U.S., “Happier” held the #1 position for three consecutive weeks on Billboard’s BDS and Mediabase/Top 40 Radio Airplay chart. It also topped Billboard‘s Alternative Songs and Dance/Electronic Streaming chart, among others.