Tickets on sale Friday, May 10th 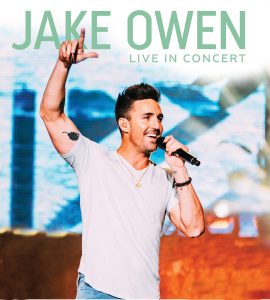 Tickets are $49.00, $39.00 and $29.00 and go on sale Friday, May 10th at 10:00am through Ticketmaster. Ticketmaster customers may log on to ticketmaster.com. Tickets will also be available at the Mohegan Sun Box Office beginning on Saturday, May 11th at 10:00am, subject to availability.

The seven-time chart-topper and Big Loud Records star recently released his sixth studio album GREETINGS FROM…JAKE to critical acclaim. Billboard called it “…Country-grounded odyssey,” People.com lauded, “Owen has let his inner Merle come out to play…” and The Tennessean noted, “…drips steel guitar and hit Country songs.” With more than 3.4 billion global career streams to date, Owen’s versatile talent continues to set the bar for anthem Country with #1 hits like “Barefoot Blue Jean Night,” “The One That Got Away,” “Beachin’,” “I Was Jack (You Were Diane),” and most recently his Top 10 hit “Down To The Honkytonk.” For tour dates and more information, visit jakeowen.net.