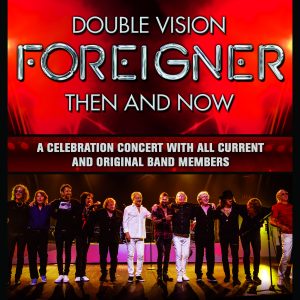 Tickets are $59.00, $49.00, and $39.00 and go on sale Friday, May 17th at 10:00am through Ticketmaster. Ticketmaster customers may log on to ticketmaster.com. Tickets will also be available at the Mohegan Sun Box Office beginning on Saturday, May 18th at 10:00am, subject to availability.

Featuring all current band members plus original band members who helped to put the iconic group on the map more than 40 years ago, Foreigner returns due to popular demand. Lou Gramm, Al Greenwood, Ian McDonald and Rick Wills join Mick Jones and Foreigner to rock through some of the best-selling songs from the band’s albums, and bring back the memories that make it feel like the first time for both long-time fans and new generations.

Founded in 1976, Foreigner‘s debut album produced the hits “Feels Like The First Time,” “Cold As Ice,” and “Long, Long Way From Home.”  The album Double Vision followed, as did a string of hits including “Urgent,” “Juke Box Hero,” and “Waiting For A Girl Like You.”  Those songs helped give Foreigner‘s  next album, 4, its impressive run at #1 on the Billboard chart. At the zenith of 80’s sound, Foreigner‘s fifth album, Agent Provocateur, gave the world the incredible #1 global hit,” I Want To Know What Love Is.”

At Foreigner‘s core is the founder and Songwriters Hall of Fame member Mick Jones, the visionary maestro whose stylistic songwriting, indelible guitar hooks and multi-layered talents continue to escalate Foreigner‘s influence, and guide the band to new horizons. A Grammy and Golden Globe-nominated songwriter, Jones is the winner of the prestigious British Ivor Novello Songwriter Award for “The Flame Still Burns,” the soundtrack music for the film Still Crazy.

Jones reformed the band in 2004 and selected lead singer Kelly Hansen to help write an inspired new chapter in the history of Foreigner. One of Rock’s greatest showmen, Hansen is known for his innate ability to connect with the crowds.  As a front man and lead vocalist, Hansen is among the most respected, consummate professionals in Rock and Roll. With a 35-year career that spans almost every area of music, from the role of lead vocalist to producing and engineering, Kelly has the unique ability to advance and excel when faced with new challenges.

Recently, Foreigner catalog sales were celebrated in Business Insider for hitting the Top 40 among the “Best Selling Music Artists of All Time.”  Foreigner has no less than 10 multi-platinum albums and has been awarded platinum singles for digital sales of “I Want To Know What Love Is,” and “Juke Box Hero,” demonstrating its resonance in the era of downloads and streams.  YouTube views of Foreigner songs total almost 500 million, and the band’s recordings are constantly featured in movies and TV shows all over the world.