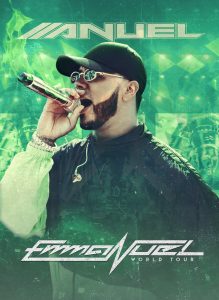 Tickets go on sale Friday, July 19th at 10:00am through Ticketmaster. Ticketmaster customers may log on to ticketmaster.com. Tickets will also be available at the Mohegan Sun Box Office beginning Saturday, July 20th at 10:00am, subject to availability.

After a year, the sensation of the urban genre and pioneer of Trap in Spanish, Anuel AA, extends the second part of his tour in the United States, which began at the end of 2018.

After the impressive success of the first part of his tour, with sold-out shows in more than 10 cities, the reowned performer of “She Wants to Drink,” will return to the United States making stops in California, New York, Miami and more.

“I am very anxious to complete the last part of this tour, I feel infinitely grateful to my fans,” expresses Anuel AA.