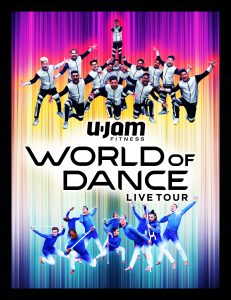 UNCASVILLE, CT (July 29, 2019) – NBC’s summer smash hit series World of Dance is proud to announce the extension of its third annual touring spectacular, The World of Dance Live Tour.  This tour will be featuring the best dancers from across all genres including The Kings, this year’s million-dollar winner, embarking on a 39-city and 41-show tour (their biggest tour yet with two shows already sold out!) that will bring the excitement and creativity straight from the television to Mohegan Sun Arena on Wednesday, October 30th at 8:00pm.

Tickets are $87.00, $67.00, and $47.00 and go on sale Friday, August 2nd at 10:00am through Ticketmaster. Ticketmaster customers may log on to ticketmaster.com. Tickets will also be available at the Mohegan Sun Box Office beginning Saturday, August 3rd at 10:00am, subject to availability.

The World of Dance Live Tour is a live interpretation of the TV show World of Dance, NBC’s hit dance competition series. The 12-episode series from Universal Television Alternative Studio and Nuyorican Productions gave numerous dancers the platform to showcase their talents and the opportunity to receive a life-altering grand prize of $1 million. The show was a primetime hit and its ratings soared, with record ratings in the United States as well as Canada.

The World of Dance was also prominently featured on the most recent international tour by Jennifer Lopez. The “It’s My Party” tour featured multiple dance troupes from the popular World of Dance show and sold out venues across the United States and Canada. This 31-market tour opened hearts and minds to the touring magic of World of Dance.

World of Dance is the world’s largest dance entertainment enterprise. What began in 2008 as a single event is now a continent-spanning, tour de force of human spirit and sick dance moves, encompassing a #1 TV show, a #1 YouTube network, and three live worldwide tours.  The World of Dance Championship Series attracts YouTube stars, industry icons, and tens of thousands of fans to events in more than 30 countries, spanning the U.S., Europe, South America, and Asia. The inspiring performance videos captured from these events have driven more than one billion views online. No language barriers. No animosity. Just pure, awe-Inspiring movement.

The first two extraordinary performers already announced for the tour include The Kings and Unity LA, with more artists to be added!

THE KINGS: The Kings, who are known in the dance community for their high-flying tricks and never-before-seen stunts, may be the most famous group of dancers you never heard of… yet. They are some of the most sought-after choreographers in Bollywood and they have won almost every competition India has to offer, including India’s Got Talent. Additionally, they were the first team from India to achieve a bronze medal at the 2015 World Hip-Hop Dance Championship. The 2015 Bollywood movie ABCD: Any Body Can Dance 2 depicts their real-life story of trial and triumph. Their years of hard work and persistence have paid off as The Kings of India have now come to World of Dance to take the next step in their quest for world domination.

UNITY LA: Since its establishment in 1994, Unity LA has developed a tremendous reputation for delivering performances that bring audiences to their feet. The group is led by Emmy Award-winning choreographer Tessandra Chavez, as well as Ashley & Zack, who are returning from Season 2 of World of Dance. Unity LA is at the top of their game and their ultimate goal is to make it to the World Final so they can tour as a company, with hopes of selling out theaters and doing what they love to do… together.

“We are proud to continue the World of Dance Live Tour that provides dynamic showcases by the dance industry’s elite dancers touring 39 cities around the country celebrating creative expression in all its forms. Join us for high energy, spectacular shows designed to get the audience engaged and on their feet!” said David Gonzalez, President of World of Dance.