UNCASVILLE, CT (August 26, 2019) – On October 25th and 26th, Bellator returns to Mohegan Sun Arena in Uncasville, CT. for two back-to-back nights of exciting MMA action.  On Friday, a heavyweight battle between former two-time UFC heavyweight champion Frank Mir (18-13) and the always-tough Roy Nelson (23-17), while Saturday’s show will see the long-awaited championship rematch between Rory MacDonald (21-5-1) and Douglas Lima (31-7) in the Finals of the Bellator Welterweight World Grand Prix with one million dollars on the line.

Bellator 231: Mir vs. Nelson will be broadcast Friday, October 25th on Paramount Network at 9:00pm ET/8:00pm CT and will simulcast on DAZN.

Bellator 232: MacDonald vs. Lima 2 will stream exclusively on DAZN on Saturday, October 26th at 10:00pm ET/7:00pm PT. Preliminary action for both events will stream on DAZN, Bellator.com and globally on the Bellator Mobile App. Additional bouts will be announced in coming weeks. 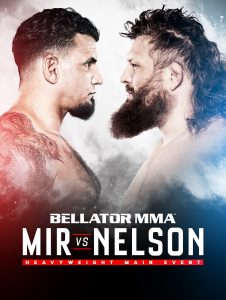 Fighting out of Las Vegas, Mir is set to enter the Bellator cage for the third time in his illustrious 18-year career when he runs it back with “Big Country” on October 25th. Following a 15-year run in the UFC, highlighted by 16 promotional wins and a pair of heavyweight world titles, the Brazilian jiu-jitsu black belt now looks for a marquee victory inside the Bellator cage. In addition to his championship belts, Mir also tallied notable victories over Brock Lesnar, Antonio “Bigfoot” Silva, Antonio Rodrigo Nogueira (twice), as well his upcoming opponent Roy Nelson a little over eight years ago. With 14 of his 18 career wins coming by way of knockout or submission, Mir hopes to replicate his success over Nelson with yet another finish inside Mohegan Sun Arena.

“Big Country” will be returning to the Bellator cage for the second time this year and for the fifth time overall, when he faces Mir in a long-awaited rematch that stems from a unanimous decision defeat back in 2011. At 43-years-old, the 40-fight veteran has collected many notable victories over the course of his 15-year career, including highlight reel knockouts over Antonio Nogueira, Antonio “Bigfoot” Silva, Mirko Cro Cop, Cheick Kongo, Brendan Schaub and Matt Mitrione. With 19 career appearances in the UFC, emphasized by his victorious run on The Ultimate Fighter season 10, the Brazilian Jiu-Jitsu black belt is looking to make another run at Bellator’s heavyweight strap. 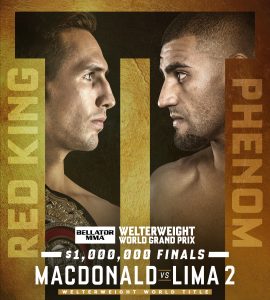 Splitting time between Kelowna, British Columbia and Montreal, Canada, MacDonald will be entering the Bellator cage for the sixth time, in search of his fourth promotional victory and second over the surging Lima. The last time the two met inside the cage, the 30-year-old Tristar Gym product emerged victorious in a 25-minute war and “Fight of the Year” candidate that resulted in a unanimous decision win for the welterweight title. Since then, MacDonald competed for the middleweight world championship against Gegard Mousasi and successfully defended his welterweight strap twice en route to the Welterweight World Grand Prix Finals. Following a pair of five-round battles with Jon Fitch at Bellator 220, and most recently Neiman Gracie at Bellator 222, the “Red King” will look to once again protect his 170-pound strap and take home the one-million-dollar tournament prize when he faces Lima on October 26th.

Hailing from Goiania, Brazil and now fighting out of Atlanta, Georgia, the 31-year-old Lima will be competing in the main event of Bellator 232, a Welterweight World Grand Prix final with two belts and a one-million-dollar prize on the line. Since making his promotional debut in 2011, “The Phenom” has earned 13 victories, including a pair of world titles and 10 finishes. The American Top Team product has won five of his last six and 10 of his last 12 contests, making him one of the most dominant fighters in the 170-pound class. With 26 of his 31 career victories coming by way of knockout or submission, including consecutive finishes over Andrey Koreshkov and Michael “Venom” Page” in the first two rounds of the tournament, Lima will attempt to add to his streak and put an early end to MacDonald’s night inside the Mohegan Sun Arena on October 26th.

ABOUT BELLATOR: Bellator is a leading global mixed martial arts and kickboxing organization featuring many of the best fighters in the world. Under the direction of veteran fight promoter Scott Coker, Bellator events take place in major cities worldwide and can be seen on television in over 160 countries to an available audience of over one billion people. In the United States, Bellator can be seen on both Paramount Network and DAZN, the world’s first truly dedicated LIVE sports streaming service. Bellator is comprised of an executive team that includes top industry professionals in television production, live event orchestration, fighter development/relations, venue procurement, sponsorship creation/development, international licensing, marketing, advertising, publicity and commission relations. Bellator is based in Hollywood, CA and owned by entertainment giant Viacom, home to the world’s premier entertainment brands that connect with audiences through compelling content across television, motion picture, online and mobile platforms.

ABOUT DAZN:  DAZN is the largest global sports streaming platform in the world. Since launching in 2016, DAZN has expanded across four continents with the app currently available for download in the United States, Canada, Germany, Austria, Switzerland, Italy, Spain, Japan and Brazil. In the U.S., DAZN has made its mark as an attractive alternative to pay-per-view within the combat sports industry. The platform features big fights from Matchroom Boxing, Golden Boy Promotions, GGG Promotions, Bellator MMA, the World Boxing Super Series and Combate Americas, all for one affordable price, on any device – including smart TVs, smartphones, tablets, games consoles and PCs. DAZN also features live MLB action each day of the season with its new daily show, ChangeUp. In September, the much-anticipated daily program The Pat McAfee Show debuts on the platform.

ABOUT PARAMOUNT NETWORK: Paramount Network is a premium entertainment destination that pushes the limits of story-telling with bold original scripted and non-scripted series. Inspired by over a century of cinema, Paramount Network is where today’s brightest stars bring the experience of the big screen to every screen with stories that are immersive, inclusive, and deeply personal.