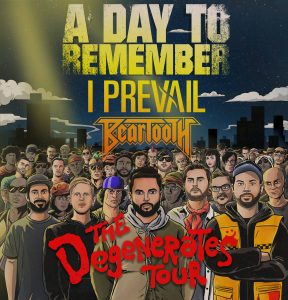 UNCASVILLE, CT (September 9, 2019) – A Day To Remember brings The Degenerates Tour to Mohegan Sun Arena on Friday, November 8th with special guests Can’t Swim, Beartooth and I Prevail at 6:30pm.

Over the course of the past several years, each of A Day To Remember’s releases have hit #1 on Billboard’s Rock, Indie and/or Alternative Charts, they’ve sold more than a million units, racked up over 400 million Spotify streams and 500 million YouTube views, garnered two gold-selling albums and singles (and one silver album in the UK) and sold out entire continental tours, amassing a global fanbase whose members number in the millions. All of which explains why Rolling Stone called them “An Artist You Need To Know.”