Connecticut REALTORS, iHeartMedia and WTNH News 8 team up to help combat opioid use disorder in Connecticut 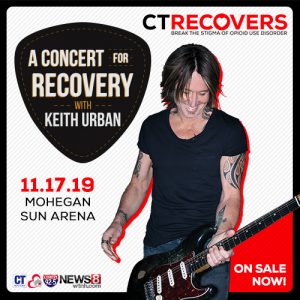 UNCASVILLE, CT (September 23, 2019) – Every day, at least two people in Connecticut die from an opioid overdose. Connecticut REALTORS, iHeartMedia and WTNH News 8 are teaming up to help reduce that staggering number. Today marks the start of a multi-month campaign to raise money and build awareness surrounding Connecticut’s opioid crisis. The campaign will air on all media platforms including television, radio, digital and social media. The highlight of the campaign will be a concert headlined by Academy of Country Music & Country Music Association “Entertainer of the Year,” Keith Urban.  Titled ‘A Concert for Recovery’ at Mohegan Sun Arena on Sunday, November 17th at 7:00pm.

Tickets are $129.00, $109.00 and $89.00 and go on sale Wednesday, September 25th at 10:00am through Ticketmaster. Ticketmaster customers may log on to ticketmaster.com. Tickets will also be available at the Mohegan Sun Box Office beginning Thursday, September 26th at 10:00am, subject to availability. Proceeds from the concert ticket sales will be donated by CT REALTORS to the CTREALTORS Foundation to provide charitable grants to organizations in CT addressing the opioid crisis.

“CT REALTORS is committed to bettering our communities,” said Dan Keune, 2019 President, CT REALTORS. “Whether it’s through disaster relief, food drives or volunteer efforts, our members are there. We are honored to partner with iHeartMedia and WTNH News 8 for this important effort to help reduce the stigma of opioid use disorder.”

Michael Barbaro, Chair of the CT REALTORS Opioid Awareness Work Group, added, “Our hope is so much bigger than this concert. We want to make a significant impact in the way people view opioid use disorder, and remove the stigma directed at those who suffer from addiction. We can’t stay on the sidelines while so many people in our communities are suffering.”

Specifics of the campaign will include public service announcements presented by local and national celebrities that speak to those seeking options and information on recovery, newscast stories and radio interviews that highlight individuals impacted by Connecticut’s opioid crisis and their road to recovery and a one-hour special television broadcast that includes highlights from Keith Urban’s ‘A Concert for Recovery’.

“Opioid misuse is an epidemic that we face in Connecticut,” said Rich Graziano, Vice President and General Manager, WTNH News 8 and WCTX MyTV9. “Through this campaign we will not only shine a light on this problem in our local community but showcase substantive solutions for recovery. Plus, having a universal celebrity such as Keith Urban, along with the trusted News 8 team to help spread the message, will draw the attention needed to help make a difference to families and save lives here in Connecticut.”

“We are thrilled to be a part of an event of this magnitude that benefits and draws attention to such an important cause impacting so many in Connecticut,” said Steve Honeycomb, President, Hartford Region, iHeartMedia Markets Group. “Through the power of radio and with the passion of our listeners we hope to keep the conversation about opioid use disorder going. We are happy to announce that Ticketmaster will be donating their fees to the CTR Foundation to provide charitable grants to organizations in Connecticut addressing the opioid crisis.”

For more information on how you can help fight Connecticut’s opioid epidemic or if you would like to donate visit CTRecovers.com.

ABOUT KEITH URBAN: Keith Urban, a four-time Grammy Award winner, two-time 2019 CMA Award nominee “Entertainer of the Year” and “Male Vocalist” and reigning CMA AND ACM “Entertainer of the Year” released “We Were” – on May 14th – his first new single of 2019.  It comes after the 2018 release of Graffiti U and his acclaimed Graffiti U World Tour, which played to more than a million fans in seven countries on three continents.

Graffiti U, which upon its debut hit #1 on charts in the United States, Canada and Australia, is Urban’s ninth studio recording and follows one of the most successful releases of his career, 2016’s RIPCORD.  Urban’s 2018 CMA nominated Album of the Year follows RIPCORD’s five #1’s, including “Blue Ain’t Your Color,” which won “Best Single” at the 2017 CMA Awards and “Favorite Country Song” at the AMAs, where he also collected trophies for “Favorite Country Album” and “Favorite Male Country Artist.” He’s had an album simultaneously atop the all-genre charts in the U.S., Canada and Australia twice and is the only male Country artist to have achieved the mark even once.

In 2001, the Country Music Association honored Urban with its “Horizon Award;” he is one of only three in history to go on to win the CMA’s “Male Vocalist of the Year,” a title he’s captured three times, and the coveted “Entertainer of the Year,” which he’s captured twice.  Besides four Grammy Awards, Urban has won 13 Country Music Association Awards, 11 Academy of Country Music Awards, four People’s Choice Awards and four American Music Awards. He is also a member of the Grand Ole Opry.

He’s long supported numerous charities.  His “All For The Hall” benefit concerts for the Country Music Hall of Fame and Museum have raised over $3.4 million.  He is the first Ambassador of the CMA Foundation, is an advisory board member at the St. Jude’s Children’s Hospital and is a longtime supporter of The Mr. Holland’s Opus Fund and The Grammy Foundation.

ABOUT CONNECTICUT ASSOCIATION OF REALTORS: CT REALTORS is a trade association representing over 17,300 members involved in all aspects of real estate in Connecticut.

ABOUT WTNH NEWS 8: WTNH News 8 continues to set the standard for news coverage excellence in Connecticut. News 8 provides news, weather and information around the clock through its television newscasts, WTNH.com website and through its digital and mobile platforms. WTNH News 8, an ABC affiliate, and WCTX MyTV9, a My Network affiliate, serve more than 871,000* households.

ABOUT MOHEGAN SUN ARENA: Mohegan Sun Arena is now ranked consistently among the top venues in the world according to Billboard Magazine, Pollstar and VenuesNow.  Mohegan Sun Arena is consistently ranked among the top three “Arenas in the World for its Size” and top 15 in the “World for All Size Venues.” The award – winning venue is the “#1 Casino Venue in the World,” “#1 Social Media Venue in the World” and a seven – time national award – winner for “Arena of the Year.”  For more information on concerts and other great events, visit Mohegan Sun. For information on this week’s schedule, call the Entertainment and Special Events hotline at 1.888.226.7711.