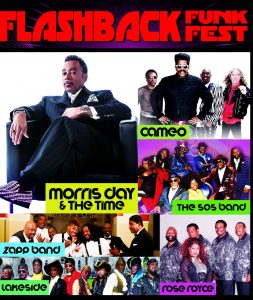 ABOUT MORRIS DAY & THE TIME: Born in Minneapolis, Day went to school with Prince Rogers Nelson and sang in Prince’s first band Grand Central.  The Time was originally created as Prince’s alter ego to be seen as the cool, street wise Funk band contrasting Prince’s more soulful R&B sound. After looking at several lead vocalists, Prince wanted someone with mad talent so he cast his high school friend the funky, the fabulous Morris Day. Soon after, Morris Day and The Time were cast in Purple Rain which captured the exploding Minneapolis music scene at its peak.

Morris Day burst onto the public scene with the group’s self-titled album, The Time, which included “Get It Up,” “Cool,” and “Girl.” Soon after the world was introduced the prolific Minneapolis music marvel, the group went on to record three more albums, including What Time Is It? (Featuring the hits “777-9311,” “Wild and Loose,” “Walk,” and “Gigolos Get Lonely Too”) and Ice Cream Castle, (which included the hit “Jungle Love”). After three albums Morris Day launched his solo career, releasing three albums: The Color of Success, Daydreaming, and Guaranteed. Combined sales of Morris Day’s solo work and The Time is in excess of 10 million units.

ABOUT CAMEO: Founded, produced and led by drummer and Harlem native Larry Blackmon. Cameo made its debut via the 1977 album, Cardiac Arrest. This album included the hits, “We’re Going Out Tonight” and “Rigormortis.” Two more albums, We All Know Who We Are and Ugly Ego helped establish Cameo with their core audience. However, it was their fourth LP, Secret Omen, including the hits “I Just Want To Be” and “Sparkle,” that began the groups journey to a whole new level of popularity and earned them their first of many gold and platinum albums to come.

Between 1980 and 1985 Cameo released 7 LPs that spawned several Billboard Top 10 hits. In 1984, their album, She’s Strange shot to #1 on the charts in both the United States and London bringing them both Pop success and critical acclaim. In 1986, Cameo released the breakthrough album Word Up propelling them to worldwide superstar status. The Word Up album was Grammy nominated for “Album of the Year.”  The title song “Word Up”, went to #1 on both the Pop and Black Music charts. The second single from that album, titled “Candy” also went to #1 on the Black Music charts. The third single from the Word Up album, “Back & Forth,” peaked at # 3 on the Billboard charts. (1987) The following year, Cameo released the Blackmon-Produced LP Machismo (1987).

Cameo, is one of the first R&B, Funk, Soul acts to establish a residency in Las Vegas. They maintained their core funkiness for nearly four decades lead & directed by Blackmon and they are still standing as one of the most popular Funk and Soul bands of its era. In the process, they have sold upwards of over 20 million records and to this day, Cameo still tours, selling out venues worldwide.

ABOUT SOS BAND: In 1977, the original band consisted of six talented musicians: Jason Bryant, Billy Ellis, Willie “Sonny” Killebrew, Bruno Speight, John A. Simpson, and James Earl Jones III and one extraordinary lead vocalist, Mary Davis.  In 1980, The S.O.S. band name was chosen and a fitting choice as the Sounds of Success debut LP went gold, selling over 800,000 copies and held #2 spot on the R&B charts for three consecutive weeks.  Skilled trumpeter/vocalist/percussionist, Abdul Ra’oof, joined the band during their first world tour.  The bands success soared from 1981 to 1986, creating five albums all on R&B charts; Too, S.O.S. Band III, On The Rise and Sands of Time.  In 1987, Mary Davis decided to pursue a solo career.  The band recorded two more albums, Diamonds in the Raw and One Of Many Nights. August of 1994, Mary reunited with Abdul Ra’oof and together they reconstructed a new band with the same unique Funk the S.O.S. Band was known for during the 80s.  The band continues to tour the world and create new music working diligently to continue the great music.

Over the course of 30 years, Zapp’s music has been sampled hundreds of times by artists around the globe, which has kept the band’s buzz going strong. Zapp’s music has had a profound effect on west coast Hip-Hop, featured in songs by Jay Z, Lil’ Kim, Snoop Dogg, Xzibit, Ice Cube and many others. Though Roger sadly passed away in 1999, the thrilling Zapp legacy lives on, fueled by his original creative spirit, with the hard-working, fearless current lineup still cooking up crafty new material and playing to throngs of jumping fans.

ABOUT LAKESIDE: The Original Lakeside journey began when a group of high school students from Dayton, Ohio formed a singing group and backup band which later morphed into a Funk band that landed a recording deal with Solar Records.  Made up of talented musicians and a ferocious stamina that has sustained them for more than 40 years, seven of the nine original members still maintain. Lakeside was the first band to successfully use a “theme” for each album cover.  The sound of Funk hits such as “All The Way Live,” “Raid,” and “Outrageous,” are known to draw people to the dance floor.  Lakeside’s soulful ballads demonstrate their versatility, style and perfect mix of vocals and band.

ABOUT ROSE ROYCE: In their 35 year recording history, Rose Royce music is currently being played on radio stations all over the world, such sensations as “Car Wash” “Wishing on a Star,” “I Wanna Get Next To You,” just to name a few. Rose Royce is a multi-platinum selling recordings artist, best known for their great ballads and are one of the funkiest bands around. Dazzling audiences worldwide, Rose Royce currently tours the United States as well as other parts of the world with their amazing and exciting show. The Grammy award winning group has sold millions of copies of the albums Car Wash, In Full Bloom and Rose Royce Strikes Again. Rose Royce is a versatile group who possesses a multitude of talent and charisma and has successfully managed to stay fresh and attract new fans.