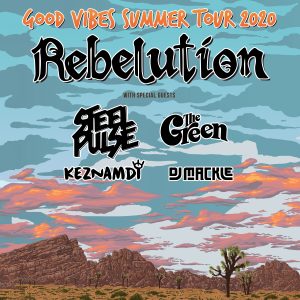 Fifteen years into an effervescent career, California Reggae band and touring juggernaut Rebelution remains abundantly creative. Its members (singer/guitarist/lyricist Eric Rachmany, keyboardist Rory Carey, drummer Wesley Finley, and bassist Marley D. Williams) are as focused and committed as they are easygoing and laid-back. Free Rein, their sixth studio album, while still rooted in the Jamaican inspiration that Rebelution’s songs and sounds have always paid homage to, takes experimental leaps and new adventures too, welcoming old fans and new audiences alike. Ever-expanding, the Rebelution phenomenon continues to spread good vibes on tour, and in the studio.