**Dave Chappelle’s appearance at Mohegan Sun Arena that had been previously rescheduled to Saturday, August 22nd is now cancelled. Refunds are available at point of purchase** 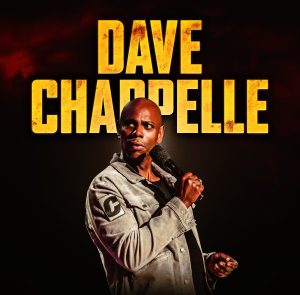 Dave Chappelle is an internationally recognized stand-up comedian and actor known for his trademark wit and sharp, irreverent social commentary. Arguably the most-touring comic on the circuit, Chappelle has performed more than 1,600 concerts worldwide in the past four years, selling out shows within minutes of their announcements.

The past few years have been banner for Chappelle. In 2019, he joined the coveted class of recipients of the Mark Twain Prize for “American Humor,” the highest award in comedy.  Additionally, he received Grammy awards for “Best Comedy Album” for his last three Netflix specials: Sticks and Stones (2019), Equanimity & The Bird Revelation (2018), The Age Of Spin & Deep In The Heart Of Texas (2017) which were delivered on vinyl as double-feature albums. In 2017, Chappelle celebrated his 30th year in comedy with a residency at New York’s Radio City Music Hall, selling more than 90,000 tickets and performing 16 shows that included 58 guests representing the biggest names in comedy and music. That year, he also received his first Emmy Award for his debut episode on Saturday Night Live. His memorable, panoramic monologue was the comic relief the country needed following the 2016 Presidential election that reflected our nation’s deep racial divide. Pollstar awarded Chappelle with “Comedy Tour of The Year” in 2014 and 2018 and he captured his second Emmy for “Outstanding Variety Special” with Equanimity in 2018.

No recording devices are allowed. All shows are cellphone, camera-free events. Audience members with cellphones will be required to place them in a locked pouch for the duration of the event. Anyone caught with a cell phone inside the venue will be immediately ejected. Additionally, all material performed is copyright protected by Pilot Boy Productions, Inc./Dave Chappelle and may not be reproduced in any form. See full policy below.

No cellphones, cameras or recording devices will be allowed at this performance. Upon arrival, all phones and smart watches will be secured in Yondr pouches that will be unlocked at the end of the show. Guests maintain possession of their phones throughout the night, and if needed, may access their phones at designated Yondr unlocking stations in the lobby. All guests are encouraged to print their tickets in advance to ensure a smooth entry process. Anyone caught with a cellphone in the venue will be immediately ejected. We appreciate your cooperation in creating a phone-free viewing experience.