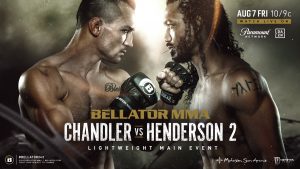 In the card’s co-main event, perennial heavyweight contender Matt Mitrione (13-7, 1 NC) will take on the hard-hitting Timothy Johnson (13-6) in an exciting matchup that will likely not go to the judges’ scorecards.

Making his 23rd promotional appearance for Bellator, “Iron” Michael Chandler will have the opportunity to silence his critics and prove that his November 19, 2016 split decision-win over Henderson was no fluke. Following victories in each of his first 12 professional bouts, highlighted by his first Bellator lightweight world title win and a pair of successful title defenses, the High Ridge, Missouri-native quickly made a name for himself in a stacked 155-pound class. The 34-year-old would eventually go on to collect a promotional record three lightweight title reigns that included three successful title defenses. Having won three of his previous five career rematches, including a pair of lightweight world title victories over Patricky Pitbull and Brent Primus, the 2009 NCAA Division I All-American wrestler at the University of Missouri will look to add to that total and remind everyone what the former champion is capable of.

Fighting out of Glendale, Arizona, “Smooth” will once again have a shot at revenge with his longtime rival Chandler, following multiple attempts to schedule the fight over the past year. The highly anticipated rematch was originally slated to take place on New Year’s Eve at Rizin.20 in Japan, before Henderson was forced to withdraw due to an injury suffered during training. A few months later, the two former lightweight world champions were set to face off in the main event of Bellator’s return to the Windy City on June 6th, before the global pandemic led to yet another postponement. Now, the MMA Lab-product will look to settle the score and collect his fifth consecutive victory en route to a final push at Bellator’s 155-pound strap. With half of his 28 career wins coming by way of knockout or submission, the 36-year-old former UFC and WEC lightweight world champion will aim to put all doubts to rest and finish his nemesis in emphatic fashion on August 7th.

After initially being scheduled to face Ronny Markes at Bellator 241 in March prior to the pandemic, Matt Mitrione is now slated to meet Johnson, a competitor who also prefers to keep the fight upright. Prior to his MMA career, the 41-year old Illinois-native was a standout defensive end at Purdue University who subsequently earned his way into the NFL, playing six seasons as a member of the New York Giants and Minnesota Vikings. He ultimately found his way into MMA where he became the high-level competitor he is today, defeating the likes of the late Kimbo Slice, Derrick Lewis, Roy Nelson and Fedor Emelianenko.

A heavy betting underdog coming into his last matchup with Tyrell Fortune at Bellator 239, Timothy Johnson shocked many when he finished the undefeated competitor five years his junior via highlight reel-knockout in the opening frame. The win was the first for the Xtreme Couture-fighter inside the Bellator cage, who signed with the promotion in 2018 following seven outings in the UFC. With an impressive finishing mark of 10 stoppages in his 13 wins as a professional, Johnson will be looking to deliver another impressive outing when he returns to action next month.

Bellator is a leading global MMA and kickboxing promotion featuring many of the best athletes in the world. Under the direction of veteran fight promoter Scott Coker, Bellator events take place in major cities around the world and can be seen on television in over 160 countries to an available audience of over one billion people. In the United States, Bellator events can be seen on both Paramount Network and DAZN, the world’s first truly dedicated LIVE sports streaming service, while Bellator MMA Recharged airs on the CBS Sports Network. Bellator is comprised of an executive team that includes top industry professionals in television production, live events, fighter development and relations, sponsorship, international licensing, marketing, advertising and public relations. Bellator is based in Hollywood, Calif. and owned by entertainment giant ViacomCBS, home to the world’s premier entertainment brands that connect with audiences through compelling content across television, motion picture, online and mobile platforms.

ABOUT MOHEGAN SUN ARENA
Mohegan Sun Arena is now ranked consistently among the top venues in the world according to Billboard Magazine, Pollstar and Venues Now. Mohegan Sun Arena is consistently ranked among the top three “Arenas in the World for its Size” and top 15 in the “World for All Size Venues.” The award–winning venue is the “#1 Casino Venue in the World,” “#1 Social Media Venue in the World” and a seven–time national award–winner for “Arena of the Year.”  For more information on concerts and other great events, visit Mohegan Sun. Mohegan Sun also has a full safety plan PDF available at mohegansun.com/updates. For information on Mohegan Sun’s entertainment, call the Entertainment and Special Events hotline at 1.888.226.7711.