Mohegan Sun, one of the world’s leading integrated 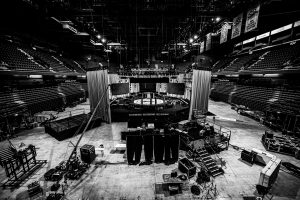 entertainment resort destinations, today announced a historic residency with SHOWTIME Sports and Bellator MMA, who selected Mohegan Sun Arena as its broadcast center for a string of nationally televised and much-anticipated events. As part of this relationship, Mohegan Sun’s world-class arena will host a series of major Premier Boxing Champions events on SHOWTIME® and SHOWTIME PPV® and mixed martial arts (MMA) fights from Bellator MMA – under strict safety protocols and with no fans in attendance – over the coming months. These leading combat sports entities chose Mohegan Sun’s award-winning arena in part due to its health and safety practices, and versatile, broadcast-friendly arena.

As live, in-person entertainment takes a backseat to virtual and televised content amid the current climate, Mohegan Sun has made proactive and strategic improvements to its facilities to successfully operate during the COVID-19 pandemic. Specifically, the brand has made several enhancements to ensure Mohegan Sun Arena is a fully functional, international remote broadcast center until audiences can be safely welcomed back to the property.

“We are extremely pleased and excited to join forces with these major sports brands, SHOWTIME Sports, Premier Boxing Champions and Bellator MMA. Our world-class venue, along with our accommodating resort facilities on-site, allows us to create a safe environment as a broadcast center and adhere to today’s sports protocols. Being chosen as host is truly a compliment to Mohegan Sun’s leadership role in the entertainment industry,” said Tom Cantone, President of Sports & Entertainment for Mohegan Gaming & Entertainment. “This is a result of a strong longtime relationship, and we are eager to bring world-class sports and entertainment back to Mohegan Sun Arena where it belongs.”

Since its phased reopening earlier this summer, Mohegan Sun has also developed a series of best-practice safety protocols to ensure proper social distancing for groups is made possible and convenient for production staff, athletes and executives while on-property. This operational framework allows Mohegan to embrace the complexity of creating a health and safety ‘bubble’ for two different organizations running live broadcast events through the month of December.

“Tom Cantone and his team at Mohegan Sun have been excellent partners and the venue has suited our unique needs to deliver both boxing and MMA,” said Stephen Espinoza, President of SHOWTIME Sports. “In order to safely broadcast these events, we have a wide range of logistics to consider. Mohegan Sun has provided everything we could need in terms of safety, continuity, and convenience. We’re proud to work with them as we deliver our first live sports telecasts since March.”

ABOUT MOHEGAN SUN:
Owned by Mohegan Gaming & Entertainment, Mohegan Sun is one of the largest, most spectacular entertainment, gaming, dining and shopping destinations in the United States.  Situated on 185 acres along the Thames River in scenic southeastern Connecticut, Mohegan Sun is home to two unique casinos, 1,600 deluxe hotel rooms, two world-class spas, a golf course, over 80 shops, restaurants and bars as well as three award-winning entertainment venues including a 10,000-seat Arena. Mohegan Sun is within easy access of New York, Boston, Hartford and Providence and located 15 minutes from the museums, antique shops and waterfront of Mystic Country. More information is available by calling 1.888.226.7711 or visiting mohegansun.com. Connect with us on Facebook, follow us on Twitter and Instagram @mohegansun, view us on YouTube and find us on Snapchat at username MoheganSun.