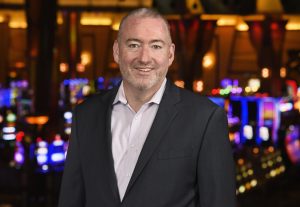 “We are pleased to introduce Kevin Lowry as the new Assistant General Manager of our flagship property,” said Mario Kontomerkos, Chief Executive Officer of Mohegan Gaming & Entertainment. “Kevin has been a member of the Mohegan family for more than 20 years and served Mohegan Sun Connecticut faithfully since we opened our doors in 1996. We are confident Kevin will guide Mohegan Sun, one of the largest integrated entertainment resorts in North America, on a path of continued growth and success.”

As an integral part of the Mohegan Sun team since its establishment, Kevin has served as the former Vice President and Chief Financial Officer for Mohegan Sun and Mohegan Sun Pocono. Within the finance department, Kevin has held the roles of Analyst, Senior Analyst, Budgets and Analysis Manager, Director of Financial Planning & Analysis, as well as Vice President of Financial Planning & Analysis over the years. He will utilize his wide range of financial knowledge as Assistant General Manager and ensure optimal performance and fiscal growth for the property.

Kevin will work alongside Jeffrey Hamilton, President and General Manager of Mohegan Sun, and the leadership team on all major initiatives. Kevin graduated from Marietta College with a Bachelor’s in Business Management and currently resides in Pawcatuck, CT with his two sons Kyle and Luke.

ABOUT MOHEGAN SUN:
Owned by Mohegan Gaming & Entertainment, Mohegan Sun is one of the largest, most spectacular entertainment, gaming, dining and shopping destinations in the United States.  Situated on 185 acres along the Thames River in scenic southeastern Connecticut, Mohegan Sun is home to two unique casinos, 1,600 deluxe hotel rooms, two world-class spas, a golf course, over 80 shops, restaurants and bars as well as three award-winning entertainment venues including a 10,000-seat Arena. Mohegan Sun is within easy access of New York, Boston, Hartford and Providence and located 15 minutes from the museums, antique shops and waterfront of Mystic Country. More information is available by calling 1.888.226.7711 or visiting mohegansun.com. Connect with us on Facebook, follow us on Twitter and Instagram @mohegansun, view us on YouTube and find us on Snapchat at username MoheganSun.