Mohegan Sun is excited to announce that Dan Webster, 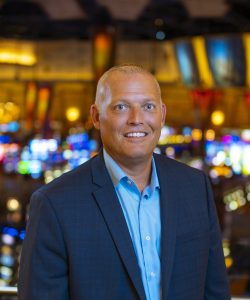 who has been with Mohegan Sun since its inception and most recently played a vital role in implementing Mohegan Sun’s health & safety reopening plan, has been named Sr. VP of Resort Operations. In this elevated role, Webster will oversee and implement strategies for various departments, including Engineering, Transportation, Food & Beverage, Hotel, Environmental Services (EVS) and Security.

“I couldn’t be more proud about the new chapter in Dan’s career,” said Jeff Hamilton, President & General Manager at Mohegan Sun. “Dan has been such a vital leader and experienced professional in his 20 + years at Mohegan Sun. He was instrumental in the planning and execution of our comprehensive safety plan upon reopening Mohegan Sun this past June, and I know he will be a major part of steering Mohegan Sun to continued success in the future.”

Webster began at Mohegan Sun as a HVAC Mechanic and from there, became HVAC Supervisor, Central Plant Manager, Director and Chief Engineer and most recently, served as Vice President of Facility Operations. Throughout these important roles within a large and complex resort & entertainment destination, Webster gained invaluable operational experience and leadership skills. As VP of Resort Operations of Mohegan Sun, Webster will lead hundreds of team members across essential departments, some of which include Transportation, Engineering, Environmental Services (EVS) and Security. He will also continue to be a major resource in the design of operational elements for new ventures embarked on by Mohegan Sun’s parent company, Mohegan Gaming & Entertainment (MGE).

Webster, who is a graduate of New England Institute of Technology in Rhode Island, lives in Griswold, CT with his wife and two sons, and also sits on the financial board of this town.