One of the premier casino and entertainment destinations in the United States made a vital pivot during the pandemic to safely host major sports, primarily inside the award-winning Mohegan Sun Arena 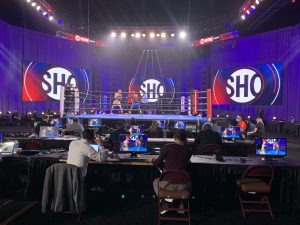 year that resulted in every major entertainment venue across the globe shutting down due to the worst pandemic in a century, accounting for billions in lost live entertainment revenue.  Mohegan Sun Arena still found a way to stay open and generate a new revenue stream by reimagining itself as a residency broadcast center. Industry leading safety protocols joined the hard-working entertainment division at Mohegan Sun, led by Mohegan Gaming & Entertainment’s (MGE) President of Sports & Entertainment, Tom Cantone – and soon major sporting events (Bellator MMA, SHOWTIME Sports and College Basketball), were planned and executed without fans in attendance. As a result, Mohegan Sun Arena became one of only few venues in the United States open and producing live events. In all, these residencies in 2020 brought in 650+ professional and college athletes competing to audiences stretching in the millions across network TV, pay-per-view, social media platforms and streaming services, the latter of which had huge impacts on increased viewership.

“We wanted to adapt in an impactful way to the unforeseen challenges that Mohegan Sun, especially our award-winning Mohegan Sun Arena, suddenly faced when the pandemic arrived,” said Dave Martinelli, Chief Marketing Officer of Mohegan Gaming & Entertainment (MGE). “These high-profile sporting events that we signed on and in which were successfully and collaboratively ran, did just that.”

The first deal was struck by Cantone this past summer when a historic residency with SHOWTIME Sports and Bellator MMA was made, creating the opportunity for a string of nationally televised and much anticipated sporting events to be featured in Mohegan Sun Arena. These live broadcast events with the ViacomCBS owned SHOWTIME Sports and Bellator MMA, which will continue in 2021, featured Premier Boxing events on SHOWTIME and SHOWTIME Pay-Per-View (PPV) as well as action packed Bellator MMA fights most frequently broadcast on the Paramount Network and CBS Sports Network. The success of the ViacomCBS residencies soon led to additional interest from other major sports – including the NCAA. Martinelli netted a deal to host 25+ Division 1 NCAA men’s and women’s college basketball teams over the course of 10 days in late November and early December 2020. The agreement came together through partnerships with The Naismith Basketball Hall of Fame and Gazelle Group.

“We created positive momentum with the incredible bubble-site residencies Mohegan Sun Arena hosted for SHOWTIME Boxing and Bellator MMA,” said Cantone. “Our efforts to keep our Arena in action proved how important relationships can be and allowed for additional opportunities such as “Bubbleville” to come to fruition. Through all of these events, comprehensive health and safety standards were carried out with tremendous efficiency by everyone involved, including the healthcare professionals with the Mohegan Tribal Health Department and other healthcare teams assisting us. I’m extremely proud of what our Mohegan Sun management, team members and our partners executed in such a challenging year.” 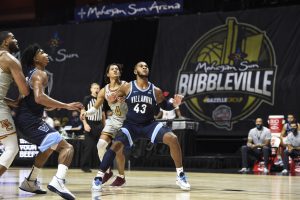 “Bubbleville,” as it was billed and came to be known in national press coverage ahead of and during its run from November 25th – December 5th of 2020, saw multiple big-time teams from the likes of Villanova, Florida, Virginia, USC, Virginia Tech, Boston College, Uconn and Arizona State take the floor for the start of their seasons. Similar to the boxing and MMA events, in-person crowds were not present though various games were played to national audiences through ESPN networks and the online streaming platform, FLOHOOPS. After unfortunate setbacks to start, where some teams were not able to take part in “Bubbleville,” the tournaments moved forward, in large part due to the strict safety measures enacted and vital testing schedules conducted by Hartford Healthcare and Mirimus, who administered 2,800 tests among teams and staff.

“Bubbleville protocols included all teams, staff and other vital personnel like referees and broadcasters to take saliva based tests upon arrival and during their stay in the bubble,” said Dave Martinelli, Mohegan Gaming & Entertainment’s CMO. “We hit some setbacks just as the games were set to begin, though focus wasn’t lost, and what followed was 10 days of great College Basketball under a tight system of the type rarely seen before at a casino resort destination.”

Villanova’s championship winning head coach, Jay Wright, also commented to APNews mid-way through “Bubbleville” at Mohegan Sun by saying, “You feel safe, you know you can get a game in here and you know the team you’re playing is going to be safe. I think that’s going to be important throughout this year to find environments like this.”

“The exposure we were able to receive as part of these opportunities last year was highly significant,” said Jeff Hamilton, President & General Manager of Mohegan Sun. “Bubbleville hosted a game on Thanksgiving night, live on ESPN, where the Arizona StateSun Devils battled and fell to the #4 Villanova Wildcats. This game had a household Television audience of 591,000, equating to nearly 1 million overall potential viewers. This was just one of many big-time national audiences our venue and brand was a part of in 2020.”

Additional highly rated events, live from Mohegan Sun Arena last year, included Bellator 249 (Cyborg vs. Blencowe on October 15th), Bellator 250 (Mousasi vs. Lima on October 29th) and Bellator 254 (Macfarlane vs. Velasquez on December 10th), among others. And one of the most anticipated boxing events came on September 26, 2020, when in a WBC World Middleweight title fight, Jermall Charlo defeated Sergly Derevyanchenko in a 12 round unanimous decision. Boxing history was also made on this night as the fight card included four other World Championship Title fights live from Mohegan Sun Arena and broadcast to viewers worldwide on Showtime Pay-Per-View (PPV). The pandemic created an opportunity to capture a home audience of more than 12 million viewers during the ViacomCBS broadcasts, with ratings in the double digits.

“During an unprecedented year, we found a way to generate a new revenue stream, create impactful brand exposure, fill hotel rooms and bring back an entertainment workforce,” said Cantone. “No virus could kill the spirit of this incredible team who made the words, “Live from Mohegan Sun Arena,” a monumental achievement in 2020.”