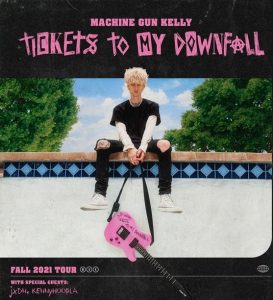 UNCASVILLE, CT (June 7, 2021) — Recording artist Machine Gun Kelly, the award-winning global performer and most recognized rockstar of his generation, will be taking his show on the road this fall. Hitting live concert venues for the first time since the release of his #1 album “Tickets to My Downfall,” fans can expect rocking performances of platinum hits “bloody valentine,” “my ex’s best friend” and more. Machine Gun Kelly will be performing in Mohegan Sun Arena on Sunday, October 31st at 7:00pm.

Praise for the artist’s 5th studio album Tickets to My Downfall came from both fans and music critics, with Billboard lauding its “dazzlingly effective songs,” Vulture calling it “punk rock excellence,” and NME praising it as “brilliant.” To kick-off 2021, MGK wowed TV viewers from Times Square at Dick Clark’s Rockin’ New Year’s Eve followed by a legendary appearance on Saturday Night Live. ET had a glowing review for SNL, saying: “MGK’s second performance really showed the range of his style and substance, as he delivered a remarkably beautiful and emotional performance of his song ‘lonely’”, and Rolling Stone praised the “raucous” performance.

Special guests on the tour include jdxn and KennyHoopla.

The “Tickets to My Downfall” tour will kick off September 9th in Minneapolis, MN and will conclude December 18th in his hometown of Cleveland, Ohio, playing the city’s largest venue, the Rocket Mortgage Fieldhouse.