UNCASVILLE, CT (August 23, 2021) – Chart-topping a cappella group Straight No Chaser will finally hit the road in-person this year after a year of cancellations due to the pandemic. The “Back In The High Life,” kicks off this fall before stopping by to rock Mohegan Sun Arena on Friday, November 26th at 8:00pm.

Tickets are $30 and go on sale, Friday, August 27th at 10:00am via Ticketmaster. Tickets are also available at https://sncmusic.com/tour. 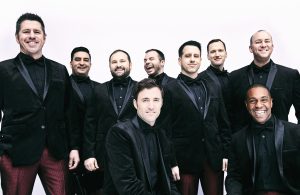 “Back in the High Life” will give fans the first opportunity to see the group perform that song in-person plus tracks from last year’s album Social Christmasing, as well as a mix of brand new arrangements and fan favorites, with a setlist changing each night.  Straight No Chaser will release a deluxe edition of Social Christmasing later this fall.  More details will be released soon.

Looking ahead to the holidays, the nine group members have compiled their favorite cocktail and food concoctions in Straight No Chaser Sound Bites: A Cappella, Cocktails, and Cuisine, a recipe book with personal family memories shared with the broader Chaser family and published by Red Lightning Books (a sister company of IU Press).  Sound Bites is due out November 2, but it is currently available for pre-order on Amazon, Barnes & Noble, Red Lightning, and on Straight No Chaser’s site

Straight No Chaser ushered in the modern a cappella craze with their breakthrough version of “The 12 Days of Christmas” twelve years ago.  Since then, the group has clocked in two RIAA-certified Gold records with more than 1 billion streams and sold more than 1.5 million concert tickets worldwide to their unforgettable live shows.  Last year, the group unveiled their latest holiday album, Social Christmasing, featuring the group’s signature twist on Christmas classics like “Silver Bells” and “Frosty The Snowman,” five new original songs, and a hopeful take on the Counting Crows classic “A Long December.”