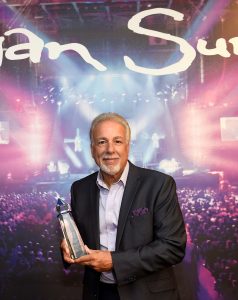 this year, the First Annual “Innovator of the Year Award.” This award is designed to recognize our entertainment industry’s most innovative organizations, who pave new paths and initiatives to creatively bring new business and productivity to our industry.

This year’s recipient: Tom Cantone, President of Sports and Entertainment, Mohegan Gaming & Entertainment (MGE); is largely responsible for revolutionizing casino entertainment to one of the most ambitious and wide-reaching on the planet. Tom’s career spans over many years spent in the gaming and entertainment industry. Currently Cantone has been at Mohegan Sun for 14 years.

2020 caused us all to take a step back and find ways to stay relevant and reimagine how to stay open and keep staff employed.  “Our first recipient embodied all these accomplishments by creating a remarkable story of historic significance during the height of the pandemic that shut down the world” stated Marc Gentilella, President/CEO of CelebrityAccess.

Mohegan Sun Arena, part of Mohegan Gaming & Entertainment’s (MGE) network of properties worldwide, never actually closed during the pandemic; Mohegan Sun partnered with ViacomCBS to broadcast a series of “Bubble” broadcasts from the facility that brought SHOWTIME Boxing and Bellator MMA events to over 12 million television screens and streaming viewers all over the world.

“We found a way to stay relevant during historic times,” Cantone says. “We could have sat it out and waited but we took advantage of opportunity that comes with a crisis. We were able to keep a lot of people working and kept the venue alive and well with non-stop programming to viewers around the world. Live From Mohegan Sun Arena were 5 special words people looked forward to every week”.

These efforts caused CelebrityAccess to name Cantone and MGE Properties, Innovator of the Year for 2020.

“This recognition is shared with great respect and empathy for all our Team Members at Mohegan Sun,” Cantone says. “At a time of uncharted territory and personal risk, they found a way to show the world what leaders do best even during an historic pandemic.”

In a huge step, Mohegan Sun Arena is now open for live audiences that included hosting a private concert to show player appreciation for Mohegan Sun and to provide a chance for ticket-takers, security, vendors and other employees to reacquaint themselves with the routines of live events and focus on Guest Service.

“It was such a great night,” Cantone says. “People were hugging each other and there was a genuine sense of rejuvenation. I think we all realized how much the people who work in the Arena and throughout the property realize this is a great place to work. It sounds corny, but we’re back to making memories.”

To date, Mohegan Sun Arena has over three dozen concerts, sporting events and performances scheduled for the Arena into December. They include Brantley Gilbert, Blake Shelton, Harry Styles, Sebastian Maniscalco, the Dave Matthews Band and the Doobie Brothers with Michael McDonald

New events will continue to be announced, Cantone says, and we have secured a commitment to host the Miss America pageant for the next three years. Justin Bieber, The Weekend and Brad Paisley have each also confirmed for shows in 2022.

“Undoubtedly, Tom’s vision of a ViacomCBS Residency will go down as one of the most successful game plans to beat a pandemic in casino and venue history”, said Marc Gentilella, President/Founder of Celebrity Access, as he presented Tom with their first and Annual Innovator of the Year Award.