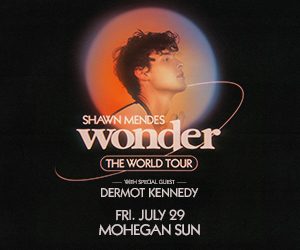 GRAMMY nominated, multi-platinum singer/songwriter Shawn Mendes will return to Mohegan Sun Arena for the first time since 2019 for “Wonder: The World Tour” on July 29, 2022 at 7:00pm. The concert at Mohegan Sun Arena is one of 64 arena shows on tour, which spans North America, the UK, and Europe, and will feature special guest Dermot Kennedy.

For all tour dates, tickets and information, please visit: http://wonderthetour.com. To access the presales, download the ShawnAccess app or sign up at ShawnAccess.com. Presales are available to all ShawnAccess member for free by logging in and claiming a presale code.

The tour announce follows Shawn’s fourth and most recent album Wonder – which debuted at No. 1 on the Billboard Top 200, making Mendes one of three male artists ever to score four No. 1 albums by 22 years old – as well as his new hit single, “Summer of Love” with Tainy.

In 2019, Shawn was nominated for a GRAMMY for “Best Pop Duo/Group Performance” for “Señorita,” his single with Camila Cabello. In 2018, he released his self-titled platinum album, which debuted at No. 1 on the Billboard 200 Chart as well as multiple worldwide markets. Shawn was nominated in two categories for the 61st annual GRAMMY® Awards, including “Song of the Year” for “In My Blood” and “Best Pop Vocal Album” for SHAWN MENDES.  The same year, Shawn debuted his certified platinum single, “If I Can’t Have You,” at No. 1 on iTunes and No. 2 on the Billboard Hot 100 chart. With “Señorita” at No. 1 and “If I Can’t Have You” at No. 2, Shawn is the first male solo artist ever to simultaneously hold the top two spots on the Top 40 chart.

In 2019 Shawn launched The Shawn Mendes Foundation, which seeks to inspire Shawn’s audience, the youth generation of today, to learn about those causes that they are passionate about, and help empower them to use the voice they have to bring change to the world by taking action & giving back.  As part of its ongoing mission, the Foundation provides resources and support to amplify the voices, messages, and platforms of young leaders driving positive change.