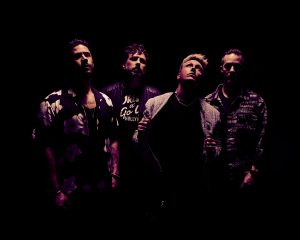 Tickets are $35 and $25 and go on sale Friday, December 17th at 10:00am via ticketmaster.com. Tickets will also be available at the Mohegan Sun Box Office beginning Saturday, December 18th, subject to availability.

“We’re really excited to be back on the road, joining up again with Hollywood Undead and Bad Wolves,” the chart-topping band shares. “Both bands bring deep catalogues and killer live shows. It’ll be a non-stop Rock N Roll thrill ride start to finish.”

Papa Roach has capped another fruitful year in 2021, after celebrating the 20th anniversary of their landmark album INFEST last year.  Throughout the year, the iconic band has teased three new tracks from their forthcoming new album, which is expected for release early next year. The first track released to radio, “Kill The Noise,” just completed a four-week run at No. 1 on the Mainstream Rock Charts. This follows “The Ending,” which peaked at No. 1 earlier this year (giving Papa Roach their ninth No. 1 single and mind-blowing, 20th Top 5 single to date).

This year also marks the band’s third Grammy nomination for the remix of “Born For Greatness (CYMEX Remix)” by Spencer Bastian, and the relaunch of the band’s own label, New Noize Records, in partnership with ADA Worldwide (WMG’s independent label and artist services arm). Capping the year off, the partnership has already achieved 100 million streams to date.

Mohegan Sun Arena is now ranked consistently among the top venues in the world according to Billboard Magazine, Pollstar and VenuesNow.  Mohegan Sun Arena is consistently ranked among the top three “Arenas in the World for its Size” and top 15 in the “World for All Size Venues.” The award – winning venue is the “#1 Casino Venue in the World,” “#1 Social Media Venue in the World” and is a seven – time national award – winner for “Arena of the Year.”  For more information on concerts and other great events, visit Mohegan Sun. For information on this week’s schedule, call the Entertainment and Special Events hotline at 1.888.226.7711.