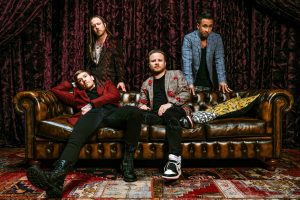 Tickets are $69, $59 and $49 and go on sale Friday, December 17th at 10:00am via ticketmaster.com. Tickets will also be available at the Mohegan Sun Box Office beginning Saturday, December 18th, subject to availability.

Shinedown – Brent Smith (vocals), Zach Myers (guitar), Eric Bass, (bass, production), and Barry Kerch (drums) – has sold more than 10 million albums and 10 million singles worldwide, earned 14 Platinum and Gold singles, six Platinum and Gold albums, 17 No. 1 Active Rock hits, and amassed more than 4.5 billion total streams. They were recently named No. 1 on Billboard’s Greatest of All Time Mainstream Rock Artists Chart after totaling 16 No. 1 singles on Billboard’s Mainstream Rock Songs Chart – the most in the history of the Billboard chart. Each of Shinedown’s 27 charting singles on Billboard’s Mainstream Rock Songs Chart has reached the Top 5 – an unparalleled achievement – and they hold the record for most Top 5 singles ever on this chart.

Shinedown’s 2018 record-breaking studio album Attention Attention (Atlantic Records), recently certified Gold by the RIAA, has been turned into an enthralling sonic and visual experience. The feature film, released in September by Gravtias Venures, is available for viewing on digital and cable viewing on-demand, Blu-ray and DVD.

Hailed for their high-octane live shows, explosive rock ‘n’ roll spirit, thought-provoking lyrics, and melodic sensibility, Shinedown continues to engender diehard love from millions of global fans and has racked up countless sold-out arena tours and festival headlining sets backed by their biggest, most eye-popping production yet, and propelled by the undeniable power of front man Brent Smith’s voice.

With iridescent sapphire hair, a show-stopping voice, runway-ready fashion swagger, and an empowering message, Diamante brings a new (and blue) fire to Rock and Alternative music. Her full-length album debut, Coming in Hot, undeniably stormed the scene in 2018 with a No. 1 song at Rock radio (her collaboration of “Hear Me Now” with Bad Wolves), along with a top 15 song with her own single “Haunted.” Her sophomore album, American Dream, shows exponential growth from Coming in Hot sonically and in its raw authenticity, proving now more than ever that Diamante’s fearlessness to bear her soul in her music is what truly sets her apart.