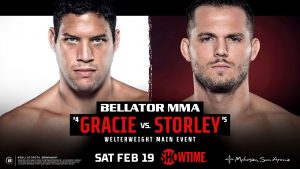 Fresh off an 87-second destruction of Mark Lemminger in the co-main event of Bellator MMA 266, No. 4-ranked Neiman Gracie (11-2) will strap on the Bellator gloves for the 12th consecutive time when he takes on once-beaten and No. 5-ranked Logan Storley (12-1) in a clash of top-10 170-pounders at Bellator MMA 274: Gracie vs. Storley on Saturday, February 19th at Mohegan Sun Arena.

In the co-featured bout in Uncasville, former Bellator Welterweight Champion and No. 8 ranked Andrey Koreshkov (24-4) will return to action and open his 2022 campaign against Mukhamed Berkhamov (15-1), a winner of his last seven contests. The main card will also see undefeated Keri Taylor-Melendez (5-0) compete at flyweight against former title challenger and No. 6 ranked Veta Arteaga (6-4). A pair of heavyweights who find themselves tied at No. 8 in the official rankings will open the main card, when undefeated prospect Davion Franklin (4-0) fights Said Sowma (8-2).

The final two preliminary contests will see Isaiah Hokit (0-1) move down to featherweight in his second Bellator outing, when he takes on Albert Birckhead (0-1) in his promotional debut. Lastly, top-flight bantamweight prospect Jaylon Bates (4-0) welcomes Chris Disonell (6-4) back to Bellator for the first time since 2019.

Bellator MMA is a leading global mixed martial arts organization featuring many of the best fighters in the world. Under the direction of veteran fight promoter Scott Coker, Bellator events take place in major cities worldwide and can be seen on television in over 160 countries to an available audience of over one billion people. In the United States, Bellator can be seen on Showtime. Bellator is comprised of an executive team that includes top industry professionals in television production, live event orchestration, fighter development/relations, venue procurement, sponsorship creation/development, international licensing, marketing, advertising, publicity, and commission relations. Bellator is based in Hollywood, California and owned by entertainment giant ViacomCBS, home to the world’s premier entertainment brands that connect with audiences through compelling content across television, motion picture, online and mobile platforms.

Mohegan Sun Arena finished 2021 with its first No. 1 Indoor Arena ranking for its capacity in the world according to Pollstar and VenuesNow, ranked among the top 10 venues in the U.S. regardless of size based on ticket sales, and was named 2021 Innovator of the Year by Celebrity Access for its ViacomCBS residency.  In recent years, the “Most Beloved Venue in America” has also been the “#1 Casino Venue in the World,” “#1 Social Media Venue in the World” and a seven – time national award – winner for “Arena of the Year.”  For more information on concerts and other great events, visit Mohegan Sun. For information on this week’s schedule, call the Entertainment and Special Events hotline at 1.888.226.7711.