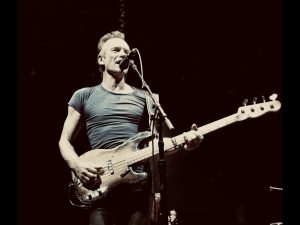 As part of his “My Songs” world tour, seventeen-time Grammy Award-winning singer-songwriter Sting returns to Mohegan Sun Arena at 8:00pm on Sunday, May 15th at Mohegan Sun Arena. Sting will be accompanied by an electric, Rock ensemble, along with special guest Joe Sumner.

Tickets are $149, $129, $89, and $69 and go on sale Friday, February 11th at 10:00am via ticketmaster.com. Tickets will also be available at the Mohegan Sun Box Office beginning Saturday, February 12th, subject to availability.

The “My Songs” concert is an exuberant and dynamic show featuring Sting’s most beloved songs written throughout his illustrious career, both with The Police and as a solo artist. Hailed as a “masterful performance from start to finish,” the concert “takes fans on a musical journey through time,” with “hits like ‘Fields of Gold,’ ‘Shape of my Heart,’ ‘Roxanne,’ and ‘Demolition Man’ punctuating an unforgettable show.” Fans can also expect to hear songs like “Englishman In New York,” “Every Breath You Take,” “Message In A Bottle” and many more.

Sting’s latest album, The Bridge, showcases his prolific and diverse songwriting prowess. Representing various stages and styles from throughout his unrivaled career and drawing inspiration from genres including Rock N’ Roll, Jazz, Classical Music, and Folk, the eclectic album features Sting’s quintessential sound on Pop-Rock tracks such as the album’s opening Rock salvo “Rushing Water,” and the upbeat, whistle-driven earworm “If It’s Love.”