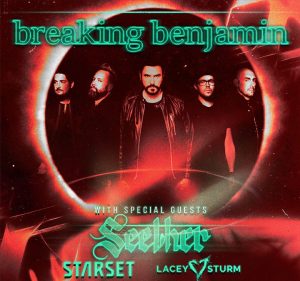 Breaking Benjamin returns to the road this spring and will join special guests Seether, Starset, and Lacey Sturm for an epic night of Rock music at 7:00pm on Saturday, April 23rd at Mohegan Sun Arena.

Breaking Benjamin are no strangers to the upper echelons of the Rock charts. Since bursting onto the scene with 2002’s Saturate, the band has amassed an impressive string of mainstream Rock radio hits, with 10 songs hitting No. 1, numerous Platinum and multi-Platinum songs and albums, 8.5 billion combined streams worldwide and a social imprint of more than 6.5 million – a testament to the band’s global influence and loyal fan base.

Their most recent release, Aurora, gave Breaking Benjamin their 10th No. 1 song at Rock radio with “Far Away” featuring Scooter Ward. Breaking Benjamin’s last studio album, Ember, debuted at No. 3 on the Billboard Top 200 chart and marked the multiplatinum band’s fourth Top 5 debut on the Billboard Top 200, following 2015’s No. 1 debut for Dark Before Dawn, 2009’s Dear Agony at No. 4 and 2006’s Phobia at No. 2. Ember spun off two No. 1 hits at Active Rock Radio with “Red Cold River” and “Torn in Two.”

Since forming in Pretoria, South Africa in 1999, Seether (Shaun Morgan, Dale Stewart, John Humphrey and Corey Lowery) has amassed a global fan base that has grown organically with purpose and commitment, offering their fans around the world camaraderie, comfort and a sense of personal power. Their impressive sales and chart history include three Platinum and two Gold albums, 22 No. 1 singles, 21 Top 5 multi-format hits, single sales topping 17 million, and more than 2 billion streams worldwide across all platforms. Seether is Billboard’s No. 8 All-Time Mainstream Rock artist, which covers the 40-year history of the chart’s existence. Their latest LP, Si Vis Pacem, Para Bellum, was released last summer via Fantasy Records. A primal mix of euphoria and misery, the new album ranks among the strongest material of Seether’s illustrious career and includes the recent No. 1 singles “Dangerous,” “Bruised and Bloodied,” and “Wasteland.”

Starset returns with their fourth studio album, Horizons. A continued voyage through a captivating science fiction narrative, Horizons delivers a cinematic soundscape that accompanies the listener through pain, love, descent, and triumph. The world has been consumed by synthetic methods of escaping reality, and it is with this technology that we are able to explore life through other users’ experiences – finally, the ability to be someone else. Starset’s epic Hard Rock styling does not disappoint, as the listener travels through a newfound digital frontier along with them.