“It’s always an honor and of course a tribute to our world-class venue and team to be included, especially last year as we reimagined our venue to stay open with sports and entertainment programming all throughout the pandemic,” said Tom Cantone, President of Sports and Entertainment at Mohegan Gaming & Entertainment. 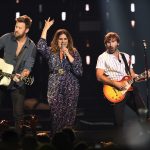 The award is presented to an outstanding arena within a casino and selected by a professional panel of judges. In order to be eligible for the award, casino arenas must have bought or promoted at least four Country concerts during the year, be in good standing with all agents, and help promote Country ticket sales.

Mohegan Sun last took home the award in 2019, its last year of eligibility since winners from previous years are not considered for consecutive nominations in the category. A win would make it the eighth time the ACM has honored Mohegan Sun Arena, and its 17th national award for the 10,000-seat Arena.

With one of the most successful years in its history, including being named Innovator of the Year by Celebrity Access, Mohegan Sun Arena drew more than 450,000 people in 2021, making it the top casino venue in the world despite being open for less than half the year.

Mohegan Sun Arena hosted Lady A – who is nominated for “Group of the Year” at this year’s award ceremony – to launch their first full-capacity national tour since re-opening for live entertainment in late July last year. Since then, Toby Keith, Blake Shelton, Brett Eldredge, Brett Young, and Chris Young also performed to sold-out crowds in the Arena in 2021. Chris Young, who made his Mohegan Sun Arena debut in December, leads all artists with seven ACM nominations, including “Album of the Year” and “Single of the Year.” Three of his nominations are shared with country superstar Kane Brown for their song “Famous Friends.”

Kane Brown and Walker Hayes, who will be performing back-to-back shows at Mohegan Sun Arena on June 4th-5th, combined for eight nominations at this year’s awards. Hayes, who will be opening for Brown alongside Raelynn, received five nominations as a first-time nominee, including “New Male Artist of the Year,” and “Song of the Year.” The second Brown concert at Mohegan Sun Arena was added by popular demand after the initial show sold out on the first day of ticket sales.

Mohegan Sun Arena already has an All-Star lineup of Country acts for 2022, including Brad Paisley, Sam Hunt, and Keith Urban, in addition to Kane Brown. More information on ticket prices and additional shows can be found at Mohegan Sun.

The 57th Academy of Country Music Awards will stream live on Prime Video on Monday, March 7th at 8:00pm. It will make history as the first major awards show to livestream exclusively.