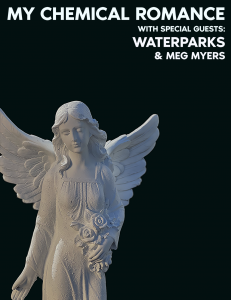 In addition to 14 new arena shows, the group has released additional tickets for their already existing and previously sold out North American shows. The 14 new shows include 10 cities across the states, as well as additional evenings in Brooklyn, Toronto, Boston, and Los Angeles.

The group will also have a number of incredibly talented acts joining them on the road as support. Waterparks and Meg Myers will join My Chemical Romance at Mohegan Sun Arena.