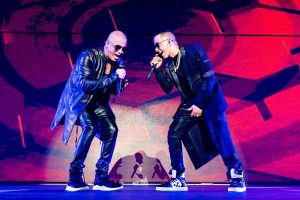 Latin music’s most iconic duo, Wisin y Yandel, have announced that they will embark on one final tour to celebrate the upcoming release of their newest album and 19 years as a duo, making these shows the last time fans can see them on stage together. Wisin y Yandel returns to Mohegan Sun Arena for one night at 8:00pm on Thursday, October 6th.

Tickets are $69, $59, $49, and $39 and go on sale Friday, March 18th at 10:00am via ticketmaster.com. Tickets will also be available at the Mohegan Sun Box Office beginning Saturday, March 19th, subject to availability.

Produced by Live Nation, the 26-city tour kicks off on September 30th in Miami before making stops across the U.S. and wrapping up in their home island of Puerto Rico.

Wisin y Yandel recently released the second single “No Se Olvida” from their upcoming album La Ultima Misión and will be honored with the “President’s Award” from BMI on March 15th.

Wisin y Yandel are revered artists who have achieved continuous success in their solo careers, yet as a Latin music duo they have enjoyed unparalleled success. During their 19-year career as a duo, they have received numerous multi-platinum certifications in the U.S. and Latin America and several prestigious awards, including a Grammy and two Latin Grammys, as well as 10 Billboard Latin Airplay chart-toppers. On tour, Wisin & Yandel have proven to be a force like no other in the Urban music world.