Mousasi will take on undefeated Johnny Eblen live on Showtime 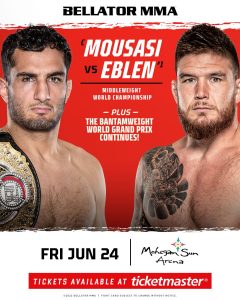 Bellator MMA will continue its stirring streak of impressive fight cards with a Middleweight World Championship and two Bantamweight Grand Prix quarterfinal combats this summer. The No. 4-ranked pound-for-pound fighter Gegard Mousasi (49-7-2) will defend his Bellator Middlewieght World Championship against No. 1-ranked Johnny Eblen (11-0), who’s fresh off a massive victory over previously No. 1-ranked John Salter. Mohegan Sun Arena will host the fights at 9:00pm on Friday, June 24, and will air live on Showtime.

In addition, fight fans can expect a captivating supporting televised card for Bellator 282: Mousasi vs. Eblen with the remaining two Bantamweight World Grand Prix quarterfinal matchups featuring Magomed “Tiger” Magomedov (18-2-0) and Leandro “Pitbull” Higo (21-5-0). The opponents for both men will be determined by a pair of Wild Card bouts set to take place at Bellator 278 on Friday, April 22nd.

Given a body of work that spans nearly 20 years and 60 fights, Mousasi is widely considered one of the best fighters of all time. Having competed in multiple weight classes from welterweight to super heavyweight, Mousasi has asserted his dominance against all challengers. A two-time Bellator MMA Middleweight World Champion, Mousasi enjoyed his first reign as the promotion’s 185-pound king in 2018, winning the title against Rafael Carvalho and defending it against Rory MacDonald. The Dutchman reclaimed his title in a dominant performance over Douglas Lima, who held the welterweight championship at the time, before adding successful TKO title defenses against John Salter and Austin Vanderford, both of whom were ranked No. 1 at the time of their fights. Now, Mousasi will look to defend his reign against a third straight No. 1 contender in a hungry Johnny Eblen.

A rising name amongst the Bellator MMA stable, current No. 1-ranked Johnny Eblen has impressed MMA fans with his ability to find the “cheat code” to take down his opponents. With 11 pro fights under his belt, Eblen jumped in rankings when he beat the previously top-ranked John Salter in March. Other notable finishes include conquering Daniel Madrid via a first-round TKO at Bellator 258 and Colin Huckbody via strikes in 71 seconds at Bellator 272. Eblen, who trains at American Top Team in south Florida, has “King Mo” Lawal, one of the few men to ever defeat Mousasi, among his coaches and will look to him for the blueprint to victory.

Bellator MMA is a leading global mixed martial arts organization featuring many of the best fighters in the world. Under the direction of veteran fight promoter Scott Coker, Bellator events take place in major cities worldwide and can be seen on television in over 160 countries to an available audience of over one billion people. In the United States, Bellator can be seen on SHOWTIME. Bellator is comprised of an executive team that includes top industry professionals in television production, live event orchestration, fighter development/relations, venue procurement, sponsorship creation/development, international licensing, marketing, advertising, publicity, and commission relations. Bellator is based in Hollywood, California and owned by entertainment giant ViacomCBS, home to the world’s premier entertainment brands that connect with audiences through compelling content across television, motion picture, online and mobile platforms.