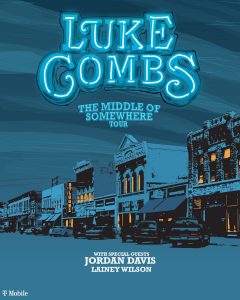 Tickets are $85, $60, $50, and $25, and go on sale Friday, May 6th at 10:00am via ticketmaster.com. Tickets will also be available at the Mohegan Sun Box Office beginning Saturday, May 7th, subject to availability.

“I know that the price of everything has been going up these last couple years and there’s nothing I can do about that, but the one thing I could do is set the price of my tickets. So, what I wanted to do was keep the ticket prices the same as they were before the pandemic. I really, really hope you guys will come out and check us out. Can’t wait to see you on the road!” Combs said of the tour.

Growin’ Up is Combs’ third studio album following 2019’s three-time Platinum What You See is What You Get and his four-time Platinum debut, This One’s For You. The new record consists of 12 songs including Combs’ current single, “Doin’ This” which is currently Top 5 at Country radio and rising.

A personal reflection on his own life and career, “Doin’ This” continues to receive widespread acclaim following its release last fall, with Billboard praising, “the North Carolina native with the full-throttle voice and arsenal of hits has become an unstoppable force,” while Music Row declares, “His heart is so huge, and there are few in the format who are as completely relatable…A masterpiece.”

“Doin’ This” continues to a triumphant run at Country radio for Combs, who once again made history as his previous single, “Cold As You,” reached No. 1 on the Billboard Country Airplay and Mediabase/ Country Aircheck charts. This is the seventh No. 1 from Combs’ deluxe album, What You See Ain’t Always What You Get—breaking the record for most No. 1 singles to come from the same album—as well as his twelfth-consecutive No. 1 single overall, another historic feat.

A member of the Grand Ole Opry and a six-time CMA, three-time ACM, three-time Billboard Music Award-winner, Combs is in the midst of a record-setting and historic series of years. His previous release, What You See Ain’t Always What You Get, debuted at No. 1 on the all-genre Billboard 200 chart as well as Billboard’s Top Country Albums chart. With the record Combs reached No. 1 on Rolling Stone’s Top 200 Albums chart, Top 100 Songs chart and Artists 500 chart—the first Country artist ever to lead all three charts in the same week and first to top the Artists 500. He also made history as the first artist ever to have their first two studio albums spend 25 weeks or more at No. 1 on Billboard’s Top Country Albums chart—breaking Taylor Swift’s previously held record at 24 weeks.