Tickets on sale Friday, May 6th 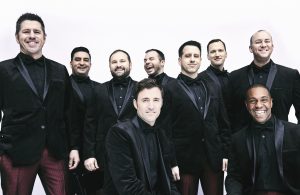 Tickets are $30 and go on sale Friday, May 6th at 10:00am via ticketmaster.com. Tickets will also be available at the Mohegan Sun Box Office beginning Saturday, May 7th, subject to availability.

Formed during the 1996-1997 school year at Indiana University, A Capella group Straight No Chaser, which began as a “way to meet girls” according to group member Steve Morgan, eventually emerged at the forefront of the modern day A Capella movement and has since sold more than three million albums worldwide, garnered more than a billion streams, and sold more than 1.5 million concert tickets worldwide.

“When we started Straight No Chaser as college kids at Indiana University, we never imagined that 25 years later, we’d have two albums certified gold and tour dates around the world,” said group member Walter Chase. “What a ride it has been. It has literally been a dream come true.”

In commemoration of The 25th Anniversary Celebration, Straight No Chaser will release an exclusive NFT to mark the occasion. All details will be revealed in the coming days on Straight No Chaser’s site and social platforms.

Additionally, PBS stations nationwide will air “Straight No Chaser: The 25th Anniversary Celebration” this June. The concert, filmed at the Murat Theatre at Old National Center in Indianapolis in 2019 where the group has sold out 27 shows, features the nine group members performing classic like “Proud Mary,” “Lean on Me” and “Twistin,” as well as Pop mash-ups like “Uptown Funk/Thriller.”

This fall, Straight No Chaser will release a physical version of last year’s deluxe edition of Social Christmasing, which featured an original song “Christmas Show,” written by group member Mike Luginbill and “Celebrate Me Home,” in addition to the album’s original track list, which included their signature twist on Christmas classics like “Silver Bells” and “Frosty The Snowman,” five new original songs, and a hopeful take on the Counting Crows classic, “A Long December.”