Enjoy live music all summer long inside Mohegan Sun Arena, the Wolf Den, and at Party on the Patio! 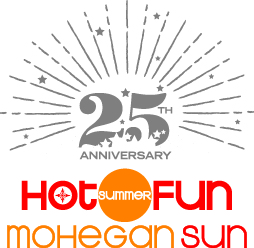 After 25 years of Hot Summer Fun at Mohegan Sun, it’s only getting hotter! This summer, Mohegan Sun has your concert and live entertainment hookup for all types of fans! Mohegan Sun will bring the heat all summer long beginning with back-to-back New Kids on the Block shows in Mohegan Sun Arena to kick off the Fourth of July weekend.

From live music and comedy in Mohegan Sun Arena, Comix Roadhouse and novelle, free performances in the Wolf Den, to Party on the Patio and Connecticut Sun home games, there is no other place to experience a greater variety of entertainment all summer long. There will be more than 250 shows and events at Mohegan Sun for a full 10 weeks, making Mohegan Sun the largest producer of live summer entertainment in the Northeast.

Wolf Den – Located in the center of the action in Casino of the Earth, the 300-seat Wolf Den offers free weekly entertainment for guests 21 years of age and older since its opening in 1996. From up-and-comers and New England’s finest acts to Classic Rock, R&B, Country, and everything in between, the Wolf Den always has something for everyone to enjoy.

Guests must be 21 years of age to enter the Wolf Den. Guests may line up no sooner than three hours before the show. Come early, limited seating is available on a first come – first served basis. One person can hold four spots in line, but seats will only be given to those present at the time of seating.

Mohegan Sun’s Party on the Patio is the best spot for over-21 fun every Friday night from 7:00pm to 11:00pm. The Summer Entrance will transform into a space where guests can enjoy drink specials like $5 beer and Grey Goose cocktails, fire pits, food trucks, and so much more while listening to some of the best tribute bands around.

All guests must be 21 or older and have a valid ID. Seating is available on a first-come, first-served basis. However, feel free to bring your own chairs! Guests are not permitted to bring coolers or outside food/beverages. Bands and food trucks subject to change.

There will not be rain dates or make-up dates. In the event of inclement weather, cancellations (only) will be announced by 2:00pm on the day of the event and bands will perform in the Wolf Den.

Comix Roadhouse is home to live comedy, country music, dance, and fantastic food and drinks. The Comedy Club inside Comix Roadhouse will host 130 shows from July 1st through Labor Day, including headliners Mike Koutrobis, Caitlin Peluffo, Marshall Brandon, and Mike Feeny. Don’t miss music every weekend in the Roadhouse, including Karaoke every Thursday night and live bands every Friday and Saturday night.

For more information on concerts or other great events, visit MoheganSun.com.

Owned by Mohegan, Mohegan Sun is one of the largest, most spectacular entertainment, gaming, dining and shopping destinations in the United States.  Situated on 185 acres along the Thames River in scenic southeastern Connecticut, Mohegan Sun is home to two unique casinos, 1,600 deluxe hotel rooms, two world-class spas, a golf course, over 70 shops, restaurants and bars as well as three award-winning entertainment venues including a 10,000-seat Arena. Mohegan Sun is within easy access of New York, Boston, Hartford and Providence and located 15 minutes from the museums, antique shops and waterfront of Mystic Country. More information is available by calling 1.888.226.7711 or visiting mohegansun.com. Connect with us on Facebook, follow us on Twitter and Instagram @mohegansun, view us on YouTube and find us on Snapchat at username MoheganSun.