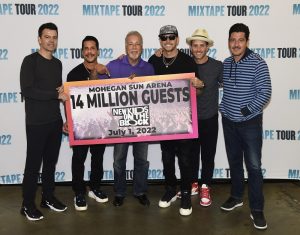 Mohegan Sun Arena celebrated the kickoff of Hot Summer Fun – the start of more than 250 live entertainment events in honor of Hot Summer Fun’s 25th Anniversary this summer – by reaching an incredible milestone of 14 million total guests in the Arena’s history since first opening in 2001.

Friday’s New Kids on the Block Mixtape Tour with En Vogue, Salt-N-Pepa, and Rick Astley isthe first of back-to-back sold-out shows in Mohegan Sun Arena this weekend and was the show that put the Arena across the 14-million mark. Tom Cantone, President of Sports Entertainment for Mohegan, celebrated the historic milestone with New Kids on the Block members Donnie Wahlberg, Joey McIntyre, Jonathan Knight, Jordan Knight, and Danny Wood before their sold-out show that evening.

“Every million milestone is a tribute to the men and women who run the Arena and is the reason why so many artists want to come here and even start their tours here,” said Tom Cantone, President of Sports and Entertainment for Mohegan.

“It’s a major achievement to surpass 14 million guests in what has become one of the busiest and most popular arenas in the world,” said Jeff Hamilton, President and General Manager of Mohegan Sun. “From the Gatti-Ward ‘Fight of the Century’ to 20 years of action-packed CT Sun games, unforgettable sold-out performances by the likes of Prince, Bruce Springsteen, Beyoncé, and so many more, our entertainment team continually knocks it out of the park.”

In 2003, Mohegan Sun made headlines as the first non-NBA owner of a WNBA team with the acquisition of the Connecticut Sun. The Sun, who are celebrating their 20th franchise anniversary this season, first made their debut at Mohegan Sun Arena in May 2003, and have since had the honor of hosting events like the WNBA draft, All-Star games, and WNBA Finals games.

Mohegan Sun Arena hosted its first live event on October 21, 2001 – an NBA preseason basketball match-up between the Boston Celtics and the Washington Wizards which featured Michael Jordan competing on the floor as a Wizard. A few weeks later, Tim McGraw took the stage as the first-ever concert at Mohegan Sun Arena.