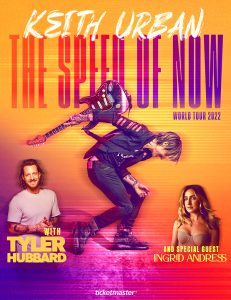 Urban’s shows feature many of his 24 No. 1 hits, some not played in years, as well as new songs never performed live. In addition, Urban’s set list includes his latest single “Brown Eyes Baby,” as well as songs reworked specifically for the tour.

Hubbard brings his trademark high-energy performance style to the tour, as well as songs from an upcoming new album. The project’s first single, “5 Foot 9” has more than 40 million global streams and is quickly moving up the charts. The second track from the project, “35’s” has more than 1 million global streams. Hubbard’s next song “Way Home” will be released on Friday, July 15th.

“I’ve been writing and recording a lot of new music for my first solo album, songs that are made to be played live,” Hubbard said. “I am so excited to be joining Keith (Urban) on his fall tour and can’t wait to play them for the first time for fans across the country.”

Critics from around the globe have hailed Urban’s concerts as ones “not to be missed,” as unpredictable as they are explosive. Combine his infectious showmanship, virtuoso guitar playing, effortless spontaneity with a fist-pumping, arena-ready arsenal of hits and The Speed of Now World promises to be one of the concert events of the summer.