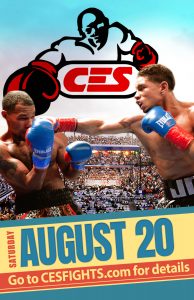 Tickets are $120, $100, $60, and $40 go on sale Friday, July 15th at Noon through Ticketmaster and cesfights.com. Tickets will also be available at the Mohegan Sun Box Office beginning Saturday, July 15th at 10:00am, subject to availability.

CES’ newest acquisition, 6-foot-6 right-hander Cassius Chaney of New London, Connecticut, and 6-4 Carini, Sicily, native Juiseppe Cusumano headline Summer Heat in separate bouts. The two CES stablemates have combined for 41 wins and 32 knockouts in nearly two decades as pros and find themselves closer to the dream of competing for a world title.

Hogan (11-0, 10 KOs), another recent addition to the CES roster and a member of the Iron Workers Local 7 union, returns after cruising to a unanimous decision win over Rodrigo Lopes Rodrigues in June. The undefeated Gonzalez (10-0, 6 KOs) aims for his fourth win of the year in as many tries, which includes a hard-fought victory over Ira Terry at CES’ April 2nd showcase in Connecticut.

Chaney (21-1, 14 KOs) returns to his home state after signing a promotional agreement with New England’s top promotion, joining forces with promoter Jimmy Burchfield Sr. Born in Baltimore, Chaney was an All-Conference basketball player at the University of New Haven.

Working with renowned trainer Stephen “Breadman” Edwards, Chaney climbed the ladder quickly among heavyweights after making his professional debut at 28 years old, winning his first 21 fights. In 2019, he made headlines on ESPN’s Friday Night Fights with a sensational win over Joel Caudle, knocking his opponent out of the ring in the first round of their scheduled eight-round showdown. Later that year, Chaney captured the vacant WBC USNBC Silver heavyweight title with a knockout win over Nick Jones.

With the burning desire to win a world title, Chaney kept busy during the pandemic, scoring two more knockouts in 2020 and opening 2021 with a knockout win over 18-fight veteran Shawndell Terell Winters in Worcester, Massachusetts. In his most recent fight in December, Chaney fought 10 hard rounds with fellow unbeaten heavyweight George Arias in New York City.

Chaney’s new teammate Cusumano (20-14, 18 KOs) is on a similar path. The heavy-handed Sicilian bounced back in June with a knockout win over Irineu Costa Junior in Rhode Island, earning career win No. 20 and his 10th overall under CES’ guidance since signing with Burchfield in 2017. Cusumano has stopped his opponent in each of his last 14 wins dating back to 2014 and remains one of the sport’s hardest punchers in the heavyweight division.

Vincent’s return to the ring brings additional star power to Summer Heat. The 43-year-old trailblazer and former world title contender boasts a 27-2 record, two nationally televised showdowns against rival Heather Hardy, and a UBF world super bantamweight championship. A fixture on the regional circuit for more than a decade, Vincent is unbeaten with CES in 17 fights, including her most recent win in November over veteran Shelly Barnett.

CES Boxing is one of the top promotions in the northeast and one of the few to successfully promote both mixed martial arts and professional boxing. Launched in 1992 by longtime boxing judge Jimmy Burchfield Sr., the promotion is the only in professional boxing to boast two reigning WBC Youth world champions in lightweight Jamaine Ortiz and featherweight Irvin Gonzalez. CES Boxing recently teamed with UFC FIGHT PASS, the world’s No. 1 streaming platform for combat sports, to showcase its events to a worldwide audience, and worked as a promotional consultant for the Mike Tyson-Roy Jones Jr. pay-per-view event in November of 2020.