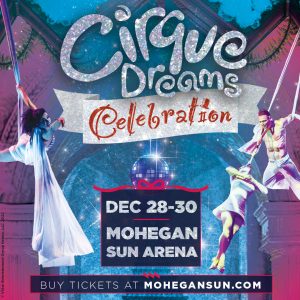 Tickets are $25 and go on sale Friday, August 5th at 10:00am via ticketmaster.com. Tickets will also be available at the Mohegan Sun Box Office beginning Saturday, August 6th at 10:00am, subject to availability.

As lights dim and the music swells, audiences will have visions of sugarplums dancing in their heads as a fantastical cast of holiday storybook characters come to life.

Featuring an ensemble of aerial circus acts, sleight-of-hand jugglers, fun-loving skippers, breath-catching acrobatics, and much more, the Dayton Daily News proclaims, “A new set of eyes should be added to my Christmas list … there’s no way the stunts I witnessed onstage actually happened as most of them aren’t humanly possible.”

Imaginative and fun for the whole family, Cirque Dreams Celebration features a world-renowned cast of performers accompanied by an original music score, including new twists on seasonal favorites such as “Deck the Halls,” “Winter Wonderland,” and “Rockin’ Around the Christmas Tree.” Singers, dancers, penguins, toy soldiers, and reindeer invoke the dreams behind a child’s eye on the most magical of nights. Amidst a backdrop of new sets, scenery, and storylines, this family-friendly production is sure to put a twinkle in your eye!

Cirque Dreams Celebration will tour the U.S. in more than 40 cities in 2022.