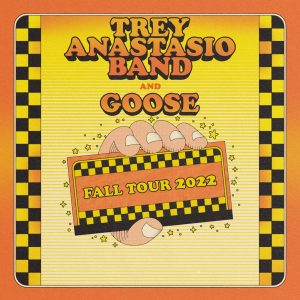 Trey Anastasio Band (TAB) and Goose are joining forces for an upcoming series of live dates, during which fans can expect a full set from each band along with unique collaborations. They take the stage at Mohegan Sun Arena at 7:00pm on Saturday, November 12th.

Tickets are $70.50 and $50.50 and go on sale Friday, August 19th at 11:00am via ticketmaster.com. Tickets will also be available at the Mohegan Sun Box Office beginning Saturday, August 20th at 10:00am, subject to availability.

Trey Anastasio Band returns to the road with a headline run getting underway in September, and a long-awaited return to Chicago for a two-night Halloween Weekend run before hitting the road with Goose.

Goose is currently traveling on their biggest North American tour thus far following the critical and popular success of their acclaimed new album, Dripfield, available everywhere now via No Coincidence Records. The jam-packed schedule continues with sold-out headline shows and a number of top-billed festival appearances.