Cardenas Marketing Network and MAGNUS announced Marc Anthony’s VIVIENDO Tour will continue in 2023, adding multiple shows, including a date at 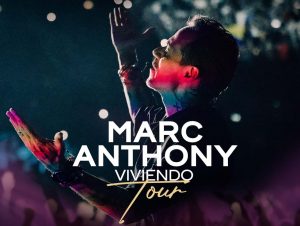 The pre-sale for this performance at Mohegan Sun Arena is scheduled for Thursday, November 17th at 10:00am. Tickets are $181, $141, $111, $91 and $61 and go on sale for the general public on Friday, November 18th at 9:00am via Ticketmaster.com.  Tickets will also be available at the Mohegan Sun Box Office beginning Saturday, November 19th, subject to availability.

For fans looking for the VIP experience, VIP packages will be available for purchase as well. These VIP Packages will allow fans to reserve premium seating, dedicated entry, merchandise, a commemorative VIP laminate and more.

About Marc Anthony: Marc Anthony is one of the most influential artists of his time and a true ambassador of Latin music and culture.  He has received countless Gold and Platinum certifications from the Recording Industry Association of America (RIAA) and has been credited with over 30 Billboard chart hits and over 7.1 billion views on YouTube.

About Mohegan Sun Arena: Mohegan Sun Arena finished 2021 with its first “#1 Indoor Arena” ranking for its capacity in the world according to Pollstar and VenuesNow, ranked among the top 10 venues in the U.S. regardless of size based on ticket sales, and was named “2021 Innovator of the Year” by Celebrity Access for its ViacomCBS residency.  In recent years, the “Most Beloved Venue in America” has also been the “#1 Casino Venue in the World,” “#1 Social Media Venue in the World” and a seven – time national award – winner for “Arena of the Year.”  For more information on concerts and other great events, visit Mohegan Sun. For information on this week’s schedule, call the Entertainment and Special Events hotline at 1.888.226.7711.