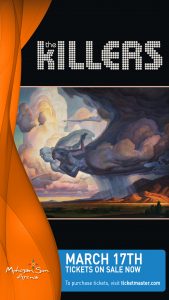 Tickets are $129.50, $99.50, and $79.50 and go on sale Friday, December 2nd at 10:00am via ticketmaster.com. Tickets will also be available at the Mohegan Sun Box Office beginning Saturday, December 3rd, subject to availability.

The Killers released their first album, Hot Fuss, in 2004 to worldwide acclaim. The album contained the singles “Mr. Brightside”, and “Somebody Told Me”, in addition to the anthemic song “All These Things That I’ve Done.” The band toured for two years straight behind Hot Fuss, playing more than 400 shows, and eventually returned to Vegas to begin work on the follow-up album with legendary producers Alan Moulder and Flood. The result, a love letter of sorts to their hometown entitled Sam’s Town, was released in 2006 and spent 42 weeks on the Billboard Top 200.

Some of their other studio albums include Day & Age in 2008, which was released to widespread critical acclaim, and Battle Born in 2012, which saw The Killers expand their world tour into countries they’ve never visited before. After a decade of making music, The Killers released a “Best Of” collection, Direct Hits, which featured two incredible new songs alongside classics from the band’s revered catalogue.

The Killers, who have sold more than 25 million albums worldwide, released their chart-topping album Wonderful Wonderful in September 2017. It garnered their first No. 1 on the Billboard Top 200 chart the week of its release in the U.S., as well as topping the charts in the U.K., Mexico, and Australia. The Killers released Imploding The Mirage in 2020, which critics hailed as one of the best records in the band’s already stellar catalog. In 2021, The Killers released their eighth album, Pressure Machine, a quieter, character-driven document of life in small town America inspired by frontman Brandon Flowers’ upbringing in rural Utah.