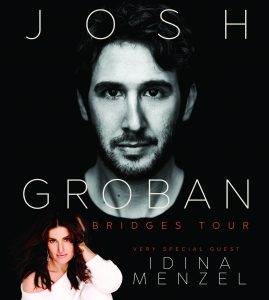 Hot on the heels of a remarkable year that included performing the smash hit “Let It Go” from Disney’s Frozen at the 86th annual Academy Awards, a triumphant return to Broadway in the musical If/Then, a Best Actress Tony Award nomination and the release of this season’s must-have Christmas album Holiday Wishes, superstar Idina Menzel announced today that she will head out on a global tour in 2015. The North American leg of the tour, promoted by Live Nation, will begin July 7th in Richmond, Va. at the Altria Theater, making stops in cities such as New York, Philadelphia, Washington, D.C., Atlanta, Austin, Boston and Chicago before wrapping in Los Angeles on October 3rd at the Hollywood Bowl. International dates for the tour will be announced soon. Mohegan Sun Arena welcomes Menzel on Saturday, July 11th for a 7:30pm concert.