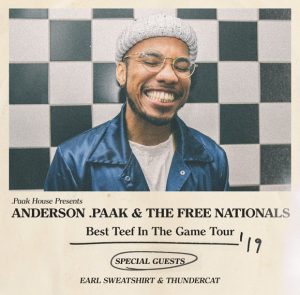 UNCASVILLE, CT (February 28, 2019) – Los Angeles, Grammy-winning artist Anderson .Paak has announced his fourth album, Ventura, to be released April 12th. With the announce of the new album also comes news of his biggest tour yet, produced by Live Nation, coming to Mohegan ...

New Kids On The Block took over the Today Show this morning to announce their 2017 headlining tour alongside Grammy Award-winning tourmates Paula Abdul and Boyz II Men. A follow-up to 2013’s hugely-successful Package Tour, the aptly titled Total Package Tour is the group’s biggest lineup yet. Paula Abdul makes her momentous return to the stage for a hit-fueled set that includes an incredible 7 #1 hit singles, while Package Tour alums Boyz II Men will deliver their trademark, multiplatinum-selling sound to fans nationwide. The Total Package Tour will be live in Mohegan Sun Arena on Thursday, July 6th at 7:30pm.

UNCASVILLE, CT (September 2, 2014) — Hot on the heels of a blockbuster performance at this year’s MTV Video Music Awards and the release of his new single/video “She Came To Give It To You,” global megastar USHER announced today he will tour North America this fall, bringing The UR Experience to fans in 27 cities. Mohegan ...

Nine-time Grammy Award winning, multi-platinum selling artist John Legend will continue his highly acclaimed 2014 North American tour with new summer dates beginning in Highland, CA on July 17th. The highly anticipated tour comes on the heels of Legend’s #1 smash single “All of Me,” from his critically acclaimed fourth studio album Love in the Future, which recently claimed the #1 spot on Billboard’s Hot 100 Singles Chart. The single marks Legend’s highest selling and charting single of his career to date, with sales over 3 million in the US. John Legend plays Mohegan Sun Arena for the first time on Friday, August 1st for a 7:30pm show.

R&B singers will perform live in Mohegan Sun Arena
Maxwell & Jill Scott, two of R&B’s biggest names, are teaming up for a joint outing this spring which will be stopping at Mohegan Sun Arena on Monday, June 21st.  The show begins at 7:00pm.
Tickets are $77.00 and $57.00 and go on sale Saturday, April 10th at 10:00am through Ticketmaster.  Ticketmaster customers may log onto ticketmaster.com; call Ticketmaster’s national toll free Charge by Phone number ...

New York-based quartet will be live in the Arena on January 30th
Bachata/R&B group Aventura are out on the road this winter and will be stopping at Mohegan Sun for a live performance in the Arena on Saturday, January 30th at 8:00pm.
Tickets are $93.00 & $63.00 and are on sale now at the Mohegan Sun Box Office and through Ticketmaster.  Ticketmaster customers may log onto ticketmaster.com; call Ticketmaster’s national toll free Charge by Phone number 1.800.745.3000; ...

In the midst of a busy movie career and the release of his chart-topping CD Intuition, Academy Award winner Jamie Foxx returns for an evening of live music at Mohegan Sun Arena on Friday, August 21st at 8:00pm.
Tickets are $95.00 and $70.00 and go on sale Friday, June 12th at 10:00am through Ticketmaster.  Ticketmaster customers may log on to ticketmaster.com, call Ticketmaster’s national toll free Charge by Phone ...