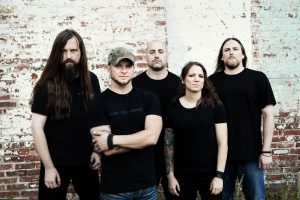 Heavy Metal band All That Remains stop by The Shops at Mohegan Sun following their Wolf Den performance for a Signings & Sightings event on Friday, April 3rd.
WHEN/WHERE:
Friday, April 3rd
Immediately following their Wolf Den performance
The Shops at Mohegan Sun
IN DETAIL:
Have a piece of Rock memorabilia “Forever In Your Hands” when All That Remains makes an exclusive Signings & Sightings appearance. The New England-based band signs copies of their latest album, The Order Of Things, in The Shops concourse immediately following their Wolf Den performance on Friday, April 3rd.
All That Remains is a Heavy Metal band from Springfield, Massachusetts. The band has released seven albums and sold over a million records worldwide. Their latest album, The Order of Things, was released in February 2015 featuring their single “This Probably Won’t End Well.” To learn more about All That Remains, connect with them on Facebook or follow them on Twitter.
*Participation is on a first-come, first-served basis.  Due to time restrictions, All That Remains will only be signing copies of their new album The Order of Things which will be available for purchase at Spin Street. This event is bracelet-only. Bracelets will be distributed upon purchase of The Order of Things at Spin Street on the day of event. Personal photos and personalization are prohibited.
ABOUT MOHEGAN SUN:
Mohegan Sun, owned by the Mohegan Tribal Gaming Authority, is one of the largest, most spectacular entertainment, gaming, dining and shopping destinations in the United States. Situated on 185 acres along the Thames River in scenic southeastern Connecticut, Mohegan Sun is home to three unique casinos, a 34-story, 1,200 room luxury hotel, a world-class spa and golf course, over 75 shops, restaurants and bars as well as three award-winning entertainment venues including a 10,000-seat Arena. Mohegan Sun is within easy access of New York, Boston, Hartford and Providence and located 15 minutes from the museums, antique shops and waterfront of Mystic Country. More information is available by calling 1.888.226.7711 or visiting mohegansun.com. Connect with us on Facebook, follow us on Twitter and view us on YouTube.
ABOUT SPIN STREET:
Proudly offering an extensive selection of CDs, books, DVDs, video games and cutting edge electronics as well as an exclusive collection of one-of-a-kind music and film memorabilia, unique gift items and a wide selection of home entertainment accessories. Spin Street, through its partnership with Mohegan Sun, is also the place to meet your favorite recording artists and authors in intimate, “once-in-a-lifetime” meet & greet sessions via our exclusive “Signings & Sightings” and “Winning Authors” programs.