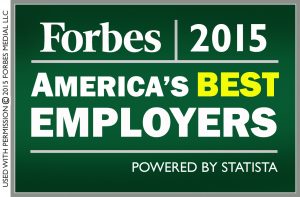 UNCASVILLE, CT  – Mohegan Sun – encompassing their flagship property in Connecticut and Mohegan Sun Pocono in Pennsylvania – was recently named one of “America’s Best Employers, 2015” by Forbes. The company was also named 12th nationwide under the Travel & Leisure category – joining iconic brands such as Walt Disney Parks & Resorts and Marriott International – and was the second highest performing gaming company within the category.

“This is a huge honor for us and a testament to our dedicated team members who work tirelessly to make our resorts the best in the industry,” said Bobby Soper, President of the Mohegan Tribal Gaming Authority (MTGA), Mohegan Sun’s parent company. “We pride ourselves on providing an outstanding environment for our team members and this recognition is a compelling endorsement of that effort.”

In a joint statement, Connecticut Governor Dannel P. Malloy and Lt. Governor Nancy Wyman stated, “Mohegan Sun has always been a good neighbor and a strong partner to state government. That they are counted among the nation’s top employers is further reason to celebrate. We congratulate Chairman Brown and the Mohegan Tribe on this honor.”

Congressman Joe Courtney added, “With thousands of my Second District constituents employed at Mohegan Sun, I am well-aware of their reputation as a sought-after employer. I am pleased to see Mohegan Sun earning national recognition for their high rate of satisfaction among their eastern Connecticut employees.”

At the Connecticut property alone, over 11% of the workforce has been with the organization since opening day over 18 years ago. Additionally, roughly 75% of all employees holding leadership positions have been promoted from within.  Mohegan Sun also boasts over an 80% retention rate year end and year out, far exceeding the national average for hospitality companies.
The results for this ranking were compiled from an independent survey conducted by Statista of American employees, one of the leading statistics companies on the Internet.

In addition to the Forbes announcement, Mohegan Sun was also honored on April 15th for the 2015 Steps to Success Award by Disabilities Matters for their partnership with Community Enterprise. Back in 2011, the two companies formed the Industry Specific Training and Placement Program – a ten week program including classroom and on-the-job training. Upon completion, participants could be hired for open positions within the company. To date, over 120 people have completed the program with a success rate of over 80%.

About the Authority: The Authority is an instrumentality of the Mohegan Tribe of Indians of Connecticut, or the Tribe, a federally-recognized Indian Tribe with an approximately 544-acre reservation situated in southeastern Connecticut. The Authority has been granted the exclusive authority to conduct and regulate gaming activities on the existing reservation of the Tribe, including the operation of Mohegan Sun, a gaming and entertainment complex located on a 185-acre site on the Tribe’s reservation. Through its subsidiary, Downs Racing, L.P., the Authority also owns and operates Mohegan Sun Pocono, a gaming and entertainment facility located on a 400-acre site in Plains Township, Pennsylvania. MTGA also manages Resorts Casino Hotel in Atlantic City.  More information about the Authority and its properties can be obtained by visiting mohegansun.com, mohegansunpocono.com, resortsac.com or mtga.com.