UNCASVILLE, CT (June 26, 2016) – Barrett-Jackson, The World’s Greatest Collector Car Auctions®, created the ultimate high octane experience at its inaugural Northeast Auction on June 23-25, 2016, attracting high profile celebrities, captains of industry and sports stars among the record-setting 90,000 people who bought over $26 million in cars and automobilia at world-class entertainment destination Mohegan Sun. In a first for the 45-year-old company, Barrett-Jackson sold out of its weekend tickets within hours of opening on Thursday.
Craig Jackson, chairman and CEO of Barrett-Jackson, comments, “Only at Barrett-Jackson can someone rub shoulders with celebs – including Carolina Panthers All-Pro tight end Greg Olsen, former NBA star Dan Gadzuric, Chef Buddy Valastro of “Cake Boss” fame, “Fast N’ Loud” host Richard Rawlings, Wayne Carini of “Chasing Classic Cars,” and actor and martial artist Chuck Zito – while bidding on some of the most collectible cars in the world. The anticipation for our event meant every seat in the arena was filled and we set many records over the weekend including the largest attendance for any event in Mohegan Sun’s history.”
From the spectacular and star-studded Opening Night Gala to the closing bid, the weekend was full of memorable moments, such as when “Cake Boss” star Buddy Valastro presented Craig Jackson with a custom replica cake inspired by his mother’s 1934 Cadillac coupe, which Jackson had purchased at the Scottsdale auction earlier this year (Valastro’s eleventh Carlo’s Bakery is located in Mohegan Sun). Additionally, as at every Barrett-Jackson event, charity was an important part of the weekend: more than $605,000 was raised for a variety of worthy causes through the sale of six charity cars. Carolina Panther Greg Olsen stepped up to the block to sell a 1969 Chevy Camaro for $100,000 to benefit his charity The HEARTest Yard, and the Zac Brown Band sold a custom 2015 Jeep Wrangler to raise $120,000 for Camp Southern Ground. 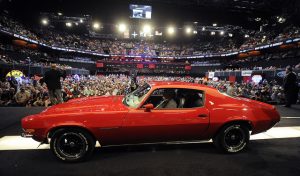 Barrett-Jackson’s vision to bring a collector car event to the Northeast region was realized with near unparalleled success for a first-time auction. The total number of bidders (over 1,700) surpassed initial projections, with a record-number registering for bidder credentials on-site. Auto enthusiasts and families traveled from across the U.S. and Canada to enjoy the event, which included special exhibits, vendors and activities such as Ford and Chevy Ride ’N Drives and Dodge Thrill Rides all three days. Ticket sales for Friday and Saturday sold out within a few hours of the Thursday opening, with Barrett-Jackson adding additional seating and auction personnel to accommodate the unprecedented crowd, even offering Twilight tickets available for purchase after 5pm.
“The inaugural Northeast Auction at Mohegan Sun had the entire region energized,” says Ray Pineault, President & GM at Mohegan Sun. “We had more guests to our beautiful resort and casino in a 3-day span than ever before. We appreciate the tremendous dedication, effort and hard work of both our Mohegan Sun team members as well as the Barrett-Jackson team. It was an incredible weekend at Mohegan Sun and we’re truly thrilled about the partnership going forward.”
Barrett-Jackson will next light up the Las Vegas strip during its 9th Annual Las Vegas Auction from Oct. 13-15, 2016. For more information on consigning your vehicle and becoming a bidder, follow the link to www.Barrett-Jackson.com.
About The Barrett-Jackson Auction Company
Established in 1971 and headquartered in Scottsdale, Arizona, Barrett-Jackson, The World’s Greatest Collector Car Auctions®, is the leader in collector car auctions and automotive lifestyle events. The company produces auctions in Scottsdale, Arizona; Palm Beach, Florida; at Mohegan Sun in Connecticut, and Las Vegas, Nevada. With broadcast partners, Velocity and Discovery Channel, Barrett-Jackson will feature live television coverage in 2016, including broadcasts in over 100 countries internationally. Barrett-Jackson also endorses a one-of-a-kind collector car insurance for collector vehicles and other valued belongings. For more information about Barrett-Jackson, visit www.barrett-jackson.com, or call 480-421-6694.

About Mohegan Sun
Mohegan Sun, owned by the Mohegan Tribal Gaming Authority, is one of the largest, most spectacular entertainment, gaming, dining and shopping destinations in the United States. Situated on 185 acres along the Thames River in scenic southeastern Connecticut, Mohegan Sun is home to three unique casinos, a 34-story, 1,200 room luxury hotel, a world-class spa and golf course, over 85 shops, restaurants and bars as well as three award-winning entertainment venues including a 10,000-seat Arena. Mohegan Sun is within easy access of New York, Boston, Hartford and Providence and located 15 minutes from the museums, antique shops and waterfront of Mystic Country.  More information is available by calling 1.888.226.7711 or visiting mohegansun.com. Connect with us on Facebook, follow us on Twitter and view us on YouTube.