UNCASVILLE, CT (August 30, 2016) – The first-ever World Caddie Matches took place on Monday, August 29th, from Mohegan Sun Golf Club in Batlic, CT. In the competitive “Ryder Cup” style match play tournament, in which some of the top US pro caddies 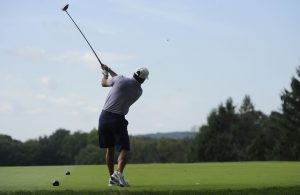 took on an International team, the US took home the win, 26 to 7.
The unique golf event, presented by Beckmen Law Firm and former PGA pro Tour caddie, Michael Collins of ESPN, gave some notable caddie’s, all impressive golfers in their own right, a chance to finally battle some of their peers they see regularly along the PGA tour season.
42-year veteran caddy of the PGA tour,  Mike “Fluff” Cowan (Jim Furyk) was on-hand competing, as was John “Long Socks” McClaren, who caddies for Paul Casey, who could also be seen helping his Caddy on every shot at Mohegan Sun Golf Club on Monday.
PGA Tour professionals Billy Hurley III, Charley Hoffman and Johnson Wagner also attended World Caddie Matches in support. Other notable Caddies that played were J.P. Fitzgerald (Rory McIlroy), Joe LaCava (Tiger Woods), Ted Scott (Bubba Watson), Mark Fulcher (Justin Rose), Brett Waldman (Charley Hoffman), Daisuke Shindo (Hideki Matsuyama), Damond Green (Zach Johnson), Christian Donald (Brendan Steele), Paul Tesori (Webb Simpson) and Gareth Lord (Henrik Stenson).
As The World Caddie Matches were winding down Monday, one of the caddies especially instrumental in organizing the event, Steve Hulka, mentioned that they raised well over the goal of $25,000 for the organization, K9s For Warriors. K9s For Warriors is dedicated to providing service canines to warriors suffering from Post-traumatic Stress Disability, traumatic brain injury and other challenges that may face men and women returning from service. Their goal is to empower them to return to civilian life with dignity and independence.
“This was a bigger success than we ever dreamed, and it could not of been accomplished without the help from my wife, Mary Hulka, and all of the other amazing folks with the PGA, Beckmen Law, Mohegan Sun and all of the caddie’s that took part. We can’t wait to bring the event back to Mohegan Sun in the future,” said PGA caddie and co-caption of the US World Caddie team, Steve Hulka.
Mohegan Sun Golf Club VP & Director of Golf Operations, Philip Krick, Jr also added, “We made a lot of good friendships through this special World Caddie Matches golf event. The caddies were amazing, K9s For Warriors is a great cause, and seeing PGA pros like Paul Casey and Charley Hoffman cheering on their caddies and friends, made for a very memorable day at Mohegan Sun Golf Club.”
About Mohegan Sun:
Mohegan Sun, owned by the Mohegan Tribal Gaming Authority, is one of the largest, most spectacular entertainment, gaming, dining and shopping destinations in the United States. Situated on 185 acres along the Thames River in scenic southeastern Connecticut, Mohegan Sun is home to three unique casinos, a 34-story, 1,200 room luxury hotel, a world-class spa and golf course, over 85 shops, restaurants and bars as well as three award-winning entertainment venues including a 10,000-seat Arena. Mohegan Sun is within easy access of New York, Boston, Hartford and Providence and located 15 minutes from the museums, antique shops and waterfront of Mystic Country. More information is available by calling 1.888.226.7711 or visiting mohegansun.com. Connect with us on           Facebook, follow us on Twitter and view us on YouTube.