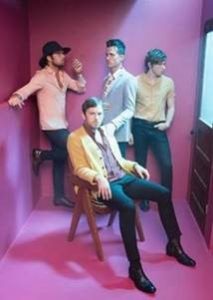 UNCASVILLE, CT (January 31, 2017) – On the heels of a #1 album, a chart-topping radio hit and a sold out first leg of a global tour, iconic Rock band Kings Of Leon announces that they will be adding a new leg of their Walls tour, traveling to all new U.S. cities. The Grammy Award-winning group will perform live at Mohegan Sun Arena on Saturday, July 29th at 7:30pm with special guest Nathaniel Rateliff and the Night Sweats.

Tickets are $79.00, $59.00 and $39.00 and go on sale Saturday, February 4th at 10:00am through Ticketmaster. Ticketmaster customers may log on to ticketmaster.com or call Ticketmaster’s national toll free Charge By Phone number 1.800.745.3000.  Tickets will also be available at the Mohegan Sun Box Office beginning on Sunday, February 5th, subject to availability.

Kings of Leon’s seventh studio album WALLS, released October 14th via RCA, marks the group’s first #1 album in the U.S., debuting at #1 on the Billboard 200 chart as well as #1 on the Alternative Albums, Rock Albums, Top Albums Sales, and Top Digital Albums Charts.  The album received amazing critical acclaim upon its release, with The New York Times calling it “timeless,” Rolling Stone saying it’s “Kings of Leon at their best” and Consequence of Sound calling the album “their best album in years.” The album includes released tracks “Reverend,” “Around The World” and “WALLS” and their hit single “Waste A Moment,” which Stereogum said sounds like “the Kings Of Leon you remember.”