The largest gathering of comic book artists and writers, featuring stars from the hottest comic books, sci-fi TV and movies, with a very special tribute to TV’s Batman, the late and great Adam West!

UNCASVILLE, CT (June 20, 2017) – Holy Terrific Comic Con! TERRIFICON, Connecticut’s largest comic and sci-fi convention, returns to Mohegan Sun’s Convention Center and Uncas Ballroom on August 18th – 20th with more stars, artists and events to satisfy the cravings of fans from around the Northeast. Don’t miss all the exclusive and unique features of this year’s TERRIFICON – three full days of fun for the whole family featuring more than 60 artists and 300 dealers of comic books, costume contests, cosplay, artwork and collectibles, video games, interactive workshops, after parties and so much more.

In Detail:
TERRIFICON, once again produced by Connecticut-based firm, Big Fedora Marketing, which has been bringing Pop culture to the Nutmeg State since 2012 (TERRIFICON, CT GamerCon), promises this will be their most thrill-packed event ever. The three-day event will feature guests such as Finn Jones and Jessica Henwick from HBO’s Game of Thrones, Marvel Comics Iron First and Marvel’s soon-to-be-released The Defenders, which debuts on Netflix on August 18th.
TERRIFICON is also a celebration of the people who bring fans’ favorite superheroes like Spider-Man, Wonder Woman, Batman, Captain America and hundreds of others to life in the pages of comic books. Fans can meet legendary artists and writers like former Marvel Editor-in-Chief, creator of Iron First, Ms. Marvel and Ultron, Roy Thomas. Thomas will be joined by artist Howard Chaykin who worked with Thomas on the Star Wars comic book in 1977. The two creators will be together for the first time on stage to discuss the Star Wars comic book, which is said to be the book that saved Marvel comics. 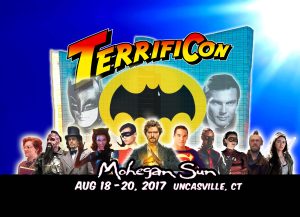 “TERRIFICON is just that: the ‘terrific’ comic con. I grew up dreaming of an event like this, and as a lifelong fan, I am making the dream a reality year after year” said Mitch Hallock, Producer and Organizer. Hallock is also a Pop culture expert and has been a podcaster for over a decade. He appears regularly as “King of the Nerds” on CT’s number one radio morning show WPLR’s Chaz & AJ.

This year’s TERRIFICON will be the largest gathering of comic book creators in Connecticut history, including a first-ever CT appearance by today’s hottest Batman team, including writer Scott Snyder and artist Greg Capullo – rock stars in the comic book industry! Other celebrity guests include: Sean Gunn from the Guardians of the Galaxy franchise and Gilmore Girls, Benedict Samuel from The Walking Dead and Gotham, Chris Sullivan from Guardian of the Galaxy Vol.2 and This Is Us, Violet Beane from The Flash, Shannon Purser from Stranger Things, Echo Kellum from Arrow and Dean Cain, TV’s Superman from Lois and Clark, who is now a recurring character on Supergirl.

TERRIFICON at Mohegan Sun will also feature Batman TV-series actor Burt Ward (Robin) and former Miss America, actress Lee Meriwether, who portrayed the Catwoman in the 1966 Batman theatrical movie. Ward and Meriwether will take part in a special tribute on Saturday night to honor their costar, cherished actor Adam West, who was scheduled to be TERRIFICON’s guest of honor, but who sadly passed away from leukemia on June 9th at the age of 88. This year’s comic convention will be dedicated to Mr. West’s memory and fans can pay their respects, share memories and see classic Batman vehicles on display, such as the 1966 Batmobile, Batcycle and Batboat, and for the first time ever in Connecticut the actual Batcopter.

ABOUT BIG FEDORA MARKETING:
This event and advertising firm is the brainchild of lifelong comic book fan and pop-culture expert, Mitch Hallock. The firm has been producing and organizing comic book conventions in Connecticut since 2012, including events held at Mohegan Sun starting in 2015. More recently, the firm launched CT GamerCon, which focuses on video and tabletop gaming, also held at Mohegan Sun in April 2017.

ABOUT MOHEGAN SUN:
Owned by the Mohegan Tribal Gaming Authority, Mohegan Sun is one of the largest, most spectacular entertainment, gaming, dining and shopping destinations in the United States.  Situated on 185 acres along the Thames River in scenic southeastern Connecticut, Mohegan Sun is home to three unique casinos, 1,600 deluxe hotel rooms, 2 world-class spas, a golf course, over 90 shops, restaurants and bars as well as three award-winning entertainment venues including a 10,000-seat Arena. Mohegan Sun is within easy access of New York, Boston, Hartford and Providence and located 15 minutes from the museums, antique shops and waterfront of Mystic Country. More information is available by calling 1.888.226.7711 or visiting mohegansun.com. Connect with us on Facebook, follow us on Twitter and Instagram @mohegansun, view us on YouTube and find us on Snapchat at username MoheganSun.