UNCASVILLE, CT (July 20, 2017) – Actors from today’s hottest shows and movies descend onto Mohegan Sun on August 18th – 20th for the Northeast’s hottest comic con. Fans of superheroes don’t have to travel to San Diego for comic con action; they can get their fill right here in Connecticut when TerrifiCon returns this August inside Mohegan Sun’s Convention Center!

Stars from Guardians of the Galaxy, Game of Thrones, The Walking Dead, Flash, Arrow and Gotham are headed for Mohegan Sun as Connecticut’s terrific comic con returns for three days of fan fun. There will be stars of today’s hottest shows and movies alongside the top comic book artists and writers from Marvel and DC Comics in attendance as fans get their geek on.

Recently added to the superstar lineup is Connecticut native, actor Will Friedle, who starred in the smash hit Boy Meets World and is also the voice talent in shows like Transformers, Guardians of the Galaxy, Kim Possible and Batman Beyond. Speaking of Batman, this year’s TerrifiCon is dedicated to the memory of actor Adam West who was scheduled to make his final appearance at this year’s show, but unfortunately passed away on June 9th. Co-stars Burt Ward who played Robin, and former Miss America, actress Lee Meriwether, who played Catwoman will be on hand to meet fans and talk about their late co-star. Friedle joins actors Finn Jones and Jessica Henwick who starred in Game of Thrones and now appear in the Marvel Netflix TV series Iron Fist and The Defenders. 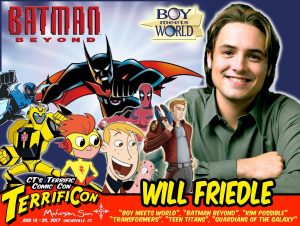 Fans can also get in on the superhero fun with the annual costume contest on Saturday, and late night comic con fun at Mohegan Sun with a celebrity poker game on Friday night and rooftop after party on Saturday.

Kids can plan on a super time with the return of Kids’ Comic Con on Saturday and Sunday, with activities aimed at the little ones with puppeteers from Sesame Street and My Little Pony artists. Plus, see the famed BatCopter, Batmobile and even BatBoat all inside Mohegan Sun’s Convention Center.
Tickets are going fast, so why not fly in and pick up yours before they are all gone! Tickets are $30.00 and $27.00 and are available to purchase now by logging on to Ticketmaster.com or calling Ticketmaster’s national toll free Charge By Phone number at 1.800.745.3000. Tickets are also available to purchase, free of service fees, at the Mohegan Sun Box Office.
*Kids ages 10 and younger will be admitted for free when accompanied by a paying adult. Military personnel, active or retired and first responders can get special Friday tickets for only $20.00 on-site at Mohegan Sun.

ABOUT BIG FEDORA MARKETING:
This event and advertising firm is the brainchild of lifelong comic book fan and pop-culture expert, Mitch Hallock. The firm has been producing and organizing comic book conventions in Connecticut since 2012, including events held at Mohegan Sun starting in 2015. More recently, the firm launched CT GamerCon, which focuses on video and tabletop gaming, also held at Mohegan Sun in April 2017.